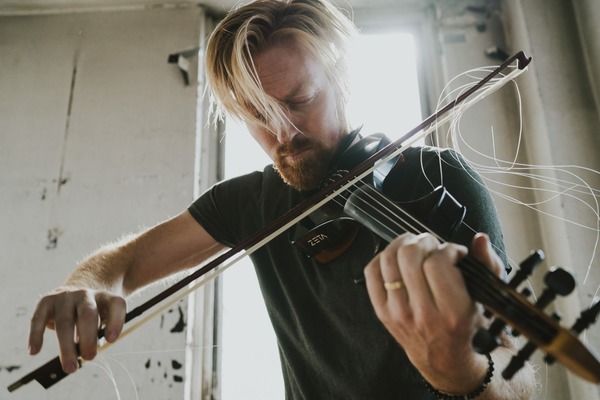 A man stands atop a stump on the edge of a forest with a fiddle. He could be the spirit of the woods — a personification of the tree that was. With no malice whatsoever, he brings his instrument to his chin and begins a blinding, soulful, fleet-fingered solo. Though he dances in place on the stump as he plays, he never loses his footing. He is, above all, rooted.

The man is Tim Snider, leader of the majestic Wolfgang Timber, and violin isn’t all he plays. He’s also an adept guitarist, a warm and welcoming vocalist, and a wizard with a loop pedal. Those who’ve seen him in action — onstage at Bonnaroo, Glastonbury, or Byron Bay Blues, or opening for Zac Brown, Dispatch, Xavier Rudd, or Rebelution — will be familiar with his passion, his inventiveness, his flexibility, and his remarkable dexterity. Snider is the sort of musician who can assemble an entire folk-rock symphony from looped passages and then follow it up with a composition of exquisite simplicity and directness.

“By Your Side,” the latest single, is quintessential Snider. It’s an immensely catchy and effortlessly winning composition that seamlessly incorporates rhythmic and harmonic elements gleaned from folk traditions from around the globe. The track showcases the artist’s astounding musical skills, but there’s nothing ostentatious about it: every perfectly placed downstroke and electrifying fiddle passage is there to enhance the meaning of the song. The message is of radical compassion, acceptance, dedication, and the enduring power of togetherness. It could be delivered to a partner by a beloved spouse, a parent to a child, or a bandleader to his collaborators.

The “By Your Side” video is suffused with Snider’s love and respect for the rest of Wolfgang Timber. The four musicians are shown having a delightful time together, playing under a gorgeous blue sky at midday in an open meadow ringed by mountains. The setting reinforces the purity of the music and the winsome quality of the songwriting — and the organic quality of Snider’s worldview. Interspersed between the shots of Wolfgang Timber in action are images of couples dancing together, supporting each other, and making their devotion manifest. Then it’s right back to the band, who are coming at you: walking toward the camera as they play, smiling, ready to welcome you into their radiant world.