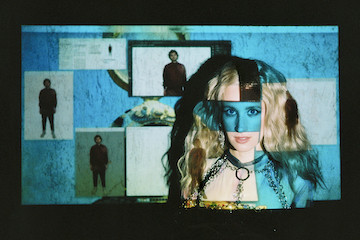 “This song, and the record, are about exploring the myths, mysteries, and possibilities beyond death. I sing “Stars shake the atmosphere, will I ever let go of this fear? Will a solid moment appear?” Amongst the narrative arc of the record, this is where the narrator stands alone with the power and terrifying beauty of the universe, asking what meaning she dares to make. I allude to a Christian mystic myth when I sing of a black hole raising her corpse from the dead- the universe going through the same life, death, and resurrection cycle as the Christ figure. As the pop elements of this song merge with the noise elements of the song, so do human elements of energy emerge from the cosmic soup. Lyrically and musically, “Black Hole Era” explores the contradictions of life and death, human and unhuman, and asks what they all mean for the individual’s will to love.”

Songwriter & songstress Debbie has been singing since her earliest years. Now 23, the fact she was raised in the church comes as no surprise. Raised on a restricted musical diet of Mary Mary and Kirk Franklin, the way the music flows out of her makes her seem like a seasoned veteran: from her reflective but effortlessly relatable lyricism to her rich, resounding voice and her spiritual curiosity, she’s a careful blend of refreshingly new and intimately familiar.

Cleveland, Ohio industrial/electronic rock band GHOSTATIC has released a brand new single “Still Haunt My Dreams” to all major platforms via Imagen Records. The band released the official music video for it today!

In the run up to their debut EP, COMA HOLE have released their single “Wind & Bone” on all streaming platforms.

Today, Nick Leng shares a music video for his new single, “Morning/Midnight,” directed by Josh Sondock. The video was inspired by Mountain Goats’ “Woke Up New” video, whcih was directed by Rian Johnson.

SKULL FIST’s impending new full-length Paid In Full will see release on April 22nd via Atomic Fire Records. In advance of the record’s official unveiling, today the band has issued a special track-by-track breakdown of the album. Watch band leader Zach Slaughter give insight into each of the eight songs comprising the offering (as well as an opportunity to get a sneak peek of the record in advance).

“I’m an agent of emotion, in this soft commotion, a bottomless crater, a lover not a hater,” sings Kent over laidback folk rock, featuring mixing from UK guitarist and engineer, Luke Potashnick.

“We’re going on the Out At The Fair tour this summer. We’ve played quite a few fairs and festivals such as OC Fair, San Bernardino Fair Main Stage, Long Beach pride main stage, DTLA Proud at Pershing Square in DTLA, and the Out At The Fair tour as well as legendary venues like The Troubadour, The Roxy, Whisky a Go Go, The Viper Room, Hard Rock Cafe, Universal City Walk and more.”

The official music video for BMG recording artist, Ryan Necci and The Buffalo Gospel “Lend Me Your Heart” is out now. Directed by Shuyler Howie of Solar Cabin Productions the video finds Necci wandering through the peaceful countryside in Nashville’s Bells Bend Park, picking up the pieces and working to make himself full again. The song was written by Necci and the track was produced by Bill McDermont.

The two have collaborated with the likes of Billie Eilish, Lauren Jauregui and gashi and have over 2.2 billion worldwide streams, reaching #21 on the Billboard 100 with their hit “Down”. They have further played late night shows like Fallon as well as touring the world playing festivals such as Coachella and Lollapalooza. In addition to their new album, they have announced an 18 date summer tour.

New video: Make Friends deliver the cinematic new video today for their standout single ‘Fever’, taken from their recent EP ‘Is This Real’

Following on from the enormous praise for their recently released EP ‘Is This Real’, which included the BBC Radio 1-endorsed single ‘Fever’, Bristol-based indie outfit Make Friends have now returned to unveil the beautifully cinematic video for their collection’s standout offering.

Brown Fang are bassist John Thompson and guitarist Henry Scott AKA Henry Claude. Thompson has toured with countless bands, including The Nectarine No9 and The Selecter, while Scott records ambient music as Fang Jr and is a mainstay of the Nottingham jazz circuit.

“I want to write the kind of music people can relate to and feel where it was written from. I want them to understand and relate to me and my writing,” says UK newcomer Chris de Sarandy about his music and the message he wants to bring across as an artist. And the message is, in fact, coming across. With incredibly relatable songs and a raspy, soulful voice, the British singer-songwriter is as authentic as he is talented.

As announced a few after ago : after unveilling some various audio and video excerpts throm the effort, Cyber-Rock/metal/electro combo OG•EZ•OR – formerly known as Entropy Zero – finally released its new full-length album called ‘Distortion process’ and available right now on Bandcamp and all the best legal platforms.

When normal service resumes and the band embark on a run of arena shows in May 2022, it is going to be a spectacle like no other. This song makes that clear, explains Luke. “This is a very direct song, about being in a band but not being able to tour. The frustration we feel because of that is huge, so we’re very much looking forward to the time when we can get out there and play. We managed to get two Christmas gigs done at the end of last year, and it was so great to be back on stage. It was emotional for the crowd as well as us: for a lot of people who came along, it was the first time they’d been out in about 18 months!”

We’ve been working on our sophomore album during the last three years, while playing live all around Israel. It’s a blazing and intriguing collection of sweaty and steaming mediterranean post-punk songs.

About Us:
We are MFRSM, a straight-ahead Post-Punk band from Tel-Aviv
We play hard and fuzzy riffs alongside Middle-Eastern melodic tunes.