The Darkness are raising hell in the video for their new single ‘In Another Life’, taken from their critically acclaimed Top 10 album Easter Is Cancelled out now via Cooking Vinyl. 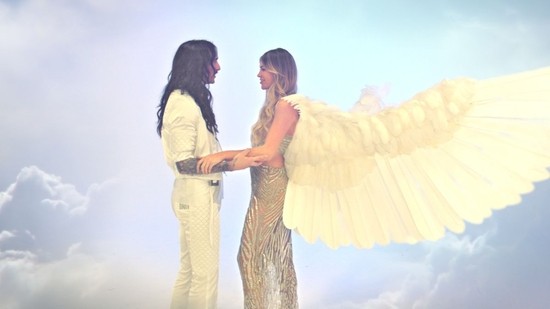 ‘In Another Life’ is a gargantuan rock opera, celebrating the multiverse theory running through their quasi-concept album, with the song capturing love and loss. The video finds frontman Justin Hawkins banished to hell, only to be redeemed by the power of rock pulsating through his guardian angel band mates Dan, Frankie and Rufus and archangel Abbey Clancy.

Regarding the video Abbey Clancy says, “It was so much fun saving Justin from the fiery gates of hell. I’m a big fan of The Darkness and I’m so happy they asked me to be involved. The guys made the video shoot so easy and we had so much fun on set. It looks amazing, and playing an angel was a heavenly way to spend the day.”