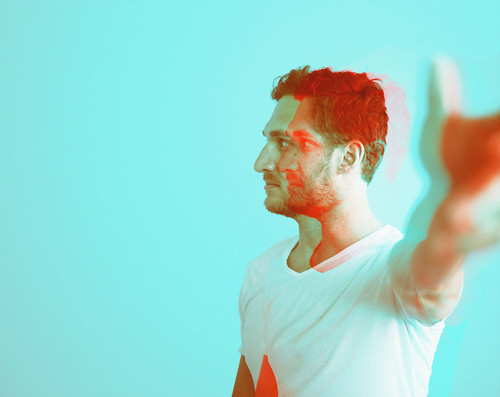 But then Katmaz is accustomed to spending time in the company of the fantastic. Through talent, hard work, and a truly personal and inimitable sense of melody, harmony, and accompaniment, he’s made himself a fixture of the Brooklyn underground. Katmaz makes folk-pop – particularly funky folk-pop – but there’s nothing predictable about his songs. He loves sudden left turns: compositional choices that delight with their unconventionality, departures from sonic expectation, playful lyrics that are simultaneously amusing, witty, and thought-provoking. “Alone (With Me)” is a perfect example of Katmaz’s singular vision: it starts as a delicious post-Beck breakup jam, slips into a dreamy singalong chorus, and rides out over a distorted synthesizer throb that adds grit to the songwriter’s tale of a long-distance relationship turned sour.

Katmaz wrote and directed the “Alone (With Me)” video and teamed up with Andy Morin as his director of photography and editor. The sly, playful clip premiered on PopMatters just before Thanksgiving; since then, it’s been nothing but accolades for Katmaz. That, too, is nothing new for the pop singer-songwriter – from the day of his first release, he’s enjoyed acclaim. The Wild Honey Pie called his prior single “Don’t Change” a “soulful piece of folk orchestration that could fill a stadium packed with awestruck fans.” Indie Shuffle praised his work, calling it beautiful enough to put the writer into a stupor. Obscure Sound called him “hypnotic,” and let the stream of the mesmerizing single “For Now” speak for itself.

The clip for “Alone (With Me)” doesn’t remain grounded in McCarren Park. Instead, midway through the video, the artist is lifted far above Brooklyn, where he plays guitar in the stars with a pair of puppets. As animated as they are, they don’t quite steal the show. The real highlight of the clip is an impromptu performance from the Unity Queen Steppers, a step team that just happened to be in the park on the day of the shooting, and who consented to back up Katmaz with some dazzling choreographed moves. That’s the kind of serendipity that Williamsburg is famous for, and Katmaz isn’t the sort of musician who lets opportunities for delight slip through his fingers.