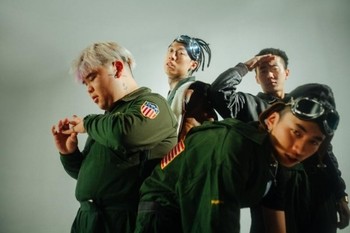 Chinese rap stars, Higher Brothers, team up with Soulja Boy in the explosive music video for “Top,” a standout single from their recently released sophomore album, Five Stars. Directed by mamesjao, the blockbuster video transports Higher Brothers into a video game world where they are strapped up with futuristic weapons and sent on a mission to fight their way to the top. Higher Brothers performed all of the highflying stunts themselves and the video features a cameo from the one and only “Big Draco” a.k.a. Soulja Boy.

Watch the “Top” video below

In support of the album “5 Stars”, Higher Brothers will headline a world tour throughout China, North America and Europe. Kicking off in Higher Brothers’ hometown of Chengdu on March 23rd, the 27-dates include stops in Shanghai, New York, Chicago, Los Angeles, and the world’s biggest hip-hop festival, Rolling Loud in Miami. In September, Higher Brothers will perform in Europe for the very first time with headlining shows in Berlin, Paris, London and more. Several dates have already sold out but limited tickets are still available at higherbrotherstour.com.