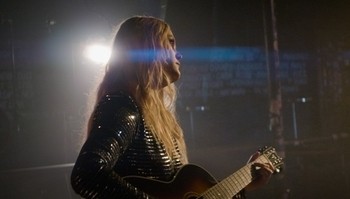 The Iowa-born, Nashville-based singer/songwriter Hailey Whitters has recently released “Ten Year Town,” her first new music in four years. The song was co-written with Brandy Clark and will appear on her new album The Dream to be released later this year.

“I wrote this song with Brandy Clark when I was coming up on a decade of being in Nashville and feeling a little lost and frustrated with the music business,” explained Whitters. “After having a few outside cuts turn into failed singles at radio, I went back to waiting tables to pay for my forthcoming record, The Dream. I felt that this song had to be the first thing people heard because it’s where the story begins for me on this record. This song is obviously very specific and personal to my journey in the industry, however I’m finding it resonates universally with multitudes of people over varying careers. I think we’ve all at one point or another, questioned the path we’re on and where it’s going. I’m a firm believer that timing is everything and I’ve learned through the process that no matter what I have to stay true to myself, have an opinion and never forget why I came to Nashville in the first place. This song is about consistently hitting pavement, and persisting in spite of it with hopes of one day seeing the light at the end of the road.”