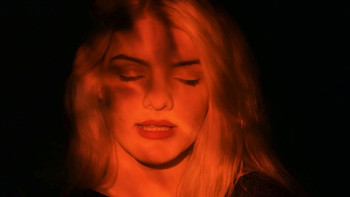 Brighton’s Luvia is back with new single ‘Hunted’. Marrying the raw attitude of Mazzy Star with the melancholic pop sensibilities of Billie Eilish and Lana Del Rey, the newcomer has already been turning heads with appearances at The Great Escape, 2000trees & Liverpool Sound City.

Luvia’s haunting cinematic pop provides the perfect sonic landscape for her emotive storytelling. Her vulnerable lyrics tell the secrets that people are too afraid to share and new track ‘Hunted’ is no exception:

“Hunted has a few layers of meaning to it – the first addresses developing and growing as a person. The character starts off quite young and naïve. She’s left to her own devices and starts to ‘grow thorns’ as she goes through her life making mistakes and growing from them. She then becomes older, ‘the lion as she hunts’ which represents how life has affected her. She’s become fierce and is trying to fill her life up with crazy experiences in order to learn from them and to excite herself. It deals with the extreme highs and lows of life, the desert being the low part and the rain and flood in the chorus being the highs. It brings out a crazy and manic side of her. The feeling is all-consuming, and she gets swept away within that mind set which inevitably leads her back to the desert. Each time she finds that she’s more and more developed; she’s changed from the rose to a lioness.”