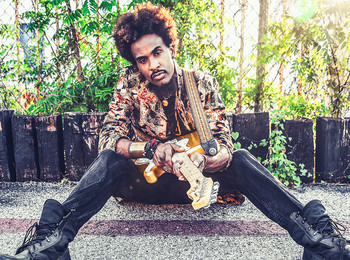 Dallas-based blues-funk guitar god STONE MECCA announced his forthcoming album Alienman and unleashed new single “Boogeyman,” via American Songwriter Magazine yesterday. Stone Mecca’s silky vocals glide atop bass-heavy grooves and psychedelic sounds to create a mysterious landscape perfectly suited for the song’s message. “I was thinking about how the media perpetuates this idea that people should be scared of the black man,” he explains. “I use this song to change the negative into a positive – turning that fear into power and omniscience. We are ingrained in this society – in this world – and our creativity and inclusiveness have influenced culture in so many ways that, love us or hate us, we’ll always be here.”

As RZA’s (Wu-Tang Clan) musical director and band leader, they’ve performed rocked out sets at sold-out shows all over the world since 2008, billed as “RZA ft. Stone Mecca”— most recently at SXSW and the Fortress Festival. Stone Mecca carries on the legacy of greats like Jimi Hendrix, and uses that foundation to build his own formidable fortification. As a solo artist and guitarist, he combines his love of hard-hitting hip hop beats and funk-driven bass lines with grinding riffs and soulful melodies. Afropunk has described him as “Gritty, imprecise, and unapologetic AF, the electric vibes…and his old school cool are lustfully intoxicating.” With a tight, energetic band, Stone Mecca’s live set packs the walls with a titanic sound.