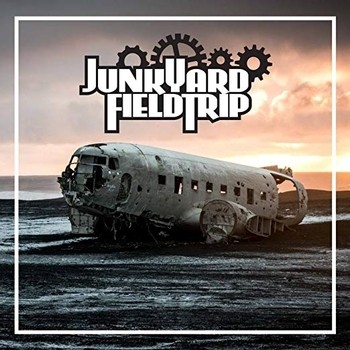 Introducing a new, heartfelt, and gifted band first created as a songwriting vehicle! This band first began by two of the members, Mike Gladstone and Rob Smith. Later on, they added Emmett Lentilucci and Don Torpy, who are known as New York’s top rhythm sections!

This album as known as JunkYardFieldTrip, released by the Spectra Music Group, begins the album with a very distinct sound that brings out the tambourine. JunkYardFieldTrip also brings out different acoustic instruments that you can all very well hear in each of the songs. Every song includes instrument. This band is very well at making sure the instruments all stand out. They are very well distributed and evenly use throughout each song. Also, it is great how this album brings out different styles of music. For example, “2 AM”, was going towards a slower and more meaningful message. Then there are ones like, “Dusty Radio”, which are more upbeat and quite catchy.

Mike Gladstone is from New York. He owns his own sound recording studio. His studio is known as, Tonesearch Studios. Mr. Gladstone has been playing guitar sing he was just eight years old! He also creates music for movie productions, television shows, and advertisements. Quite an impressive background. It is always a great thing to do in the entertainment industry to make sure that each artist makes themselves well-known and really build their clientele! Mr. Gladstone has had a fair share of working with many other artists! For example, Eddie Money, Kelly Pickley, Charlie Daniels, and etc. Rob Smith is the lead vocal/guitarist. He is also known for developing the Junkyardfieldtrip and starting it as a songwriting vehicle for himself and Mr. Gladstone. Mr. Smith began with singing in church choir and played tuba in his high school years. Because of his previous side gigs, it has led him to his songwriting which eventually led to Junkyardfieldtrip! Moving forward with Emmett Lentilucci. He was raised in New York as well and played drums at 15 years old. Mr. Lentilucci also has a quite impressive background. He graduated as an honors student from a Musicians Institute, known as Percussion Institute of Technology! This school is located in Los Angeles. Emmett Lentilucci did move to Los Angeles for a period of time. Mr. Lentilucci has performed for many other artists as well. For example, he has performed on the David Letterman Show and about more than 50 other groups that are from western New York. Lastly, Don Torpy plays his bass guitar, whom is, quite impressively, a self-taught musician! He has looked up to many bands and had grown heavily inspired by Chicago, Tower of Power, and Rush. He mixes well working with other bands in the past; and some of those being the best bands or musicians in the city!

Going in depth with each musician in this band gives a bit of perspective. This allows the listeners to have a bit of understanding where these extremely talented musicians are coming from! Fans who could really understand the lyrics and the meaning behind them, feel a greater connection with their favorite artists and bands. This band consists of some of the most passionate group of men, just remember to keep the consistency with the hard work. I could see nothing but good things for this band in the future.

The official website for JunkYardFieldTrip may be found at http://www.junkyardfieldtrip.com