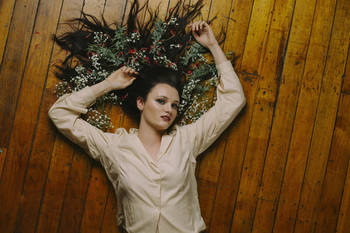 Premiering via Goodnights with Linda on triple j, ‘Porcelain Doll’ is AYLA’s most matter-of-fact release to date – almost a direct letter. Riffing on her alabaster skin, AYLA remarks, “I’m pretty pale… I’ve been called a porcelain doll by a few people, but it was just one that I wrote this song to,” she says. “The songs I write are usually more of a mixture of different thoughts, or more metaphorical, but this one is pretty direct language, just talking.”

Flexing her growth as a writer across not just on ‘Porcelain Doll’ but the entirety of Let’s Talk Monday, AYLA teamed up with super-human team, co-writer Glenn Sarangapany (Birds of Tokyo) producer Sam Cromack (Ball Park Music) and mixer Ian Pritchett (Boo Seeka, Kim Churchill, Angus & Julia Stone). Exploring techniques new to AYLA including writing and recording on electric guitar and vocal layering as instrumentation has helped expand the possibilities of her sound – as well as breathing new life into previously dormant tracks such as the six-year-old ‘Cry Honey, Cry’. The result is a release that blossoms with uniqueness and shimmers with a maturity far beyond the Sunshine Coast songstress’ years. For AYLA though, the six tracks mark a natural progression from debut EP When The World Ends, journaling pivotal realisations and anecdotes in her life. Opening with the familiar ‘Shallow End’, the EP offers a taster before diving deep into AYLA’s 2016 anthem for being different in ‘Like The Other Kids’. What follows are a four previously unreleased tracks documenting themes such as; love and commitment (‘Porcelain Doll’), friend connection vs emotional connection (‘New Furniture’) and a nod to winter romance (‘Too Cold For June’).