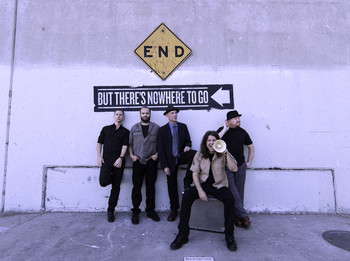 LA -based roots-rock band Jason Heath And The Greedy Souls is set to release its new album, But There’s Nowhere To Go, on October 13, 2017 via Industrial Amusement. It is the band’s second album for Wayne Kramer’s label. The record is a cry from the broken belly of the American Dream, where time, neglect, and corruption have taken their toll on this grand experiment called the U.S. of A. Seems like there’s nothing left to do but howl at the moon, and set out through the wilderness of the unknown in search of a new direction.

The new songs were mostly written as the band was on tour after the U.S. Presidential election last November. Traveling the country in its aftermath, Heath saw and heard from all walks of American life and put those observations into his new work. “It couldn’t be helped,” says Heath. “We are losing our national identity. Everyone is looking for someone else to blame. Faith in the status quo has been lost. There is a general feeling of confusion and misrepresentation, no matter who one voted for. There is a national ambience of panic, a fear of the unknown, and an overall distrust of any institution.

Is there a specific story behind this song? What inspired you to write it?

No particular story, but the song was written about the inequality and injustice that is prevalent in U.S. foreign and domestic policy. It’s a cry for a leveling of the playing field if you will. The deck has been stacked for quite a while now and it’s time for those folks in need, that have been marginalized and maligned for so long, to be given a fair shot.

How was the recording process for this one? Was it a “first take was the best” scenario, or did you really have to work at it to get it where you wanted it?

We’re normally a first, second or third take sorta band… so I imagine it was one of those. We’ll go back afterward and punch in what needs to be fixed and then layer some overdubs on top of that. We brought in a horn section to capitalize on the “Motown maximum R&B” vibe that really seemed to capture what we were after.

Are you music first/lyrics second writer or vice versa?

Yes! All of the above in no particular order… whichever one comes first. I try not to get in the way too much. Sometimes it all happens at the same time. Fortunately nobody’s been injured yet…

Whose idea was the video treatment? What story did you hope the video would tell?

That was a simple Idea I had about an “unfair” fight with one boxer being tied up, and then we bounced the idea back and forth between me and the director, who happens to also be our organ player, Jason Federici. It wound up being a fighter/Wall Street broker named Wally “Solid Gold” Street vs. WE The People. We just thought it would be an interesting and sort of comical depiction of a very seriously fucked up situation

So Jason directed the clip. Where did you film it?

Have you played this song live much? If so, what has the reaction been to it?

We played this song quite a bit on tour last fall across the U.S. and a few dates in Canada before we even recorded, so we had a lot of time to work out the feel. Folks seem to enjoy the tune for sure.