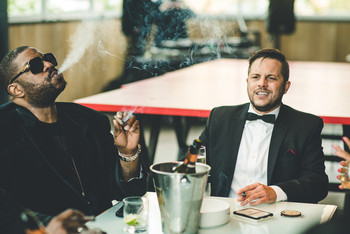 Atlanta emcee Dillon Maurer has teamed up with producer Diamond D Black Tie Affair, their collaboration EP out now featuring Dillon on rhymes and cuts and Diamond on beats. The EP features Dillon’s longtime collaborator Paten Locke (who also works frequently with Edan) plus support from Boog Brown, Alexa Lima on piano, Terminus Horns, Ben Hameen on guitar & DJ Harrison on Rhodes. Residing in Atlanta, Dillon recently released the Food Chain full-length with Locke, which featured Dres of Black Sheep, Homeboy Sandman, Count Bass-D, J-Live and Supa Dave West. A bona fide Hiphop legend and Grammy-Winner, Diamond D is a member of the Diggin In The Crates crew which also includes Lord Finesse, O.C., Fat Joe, Buckwild, Showbiz and A.G. and the late Big L, and has produced tracks for The Fugees, Big L, Pharoahe Monch, Busta Rhymes and Mos Def. Dillon’s solo releases include Studies In Hunger, Dillon Ain’t Playin’, and Cupid’s Revenge (Bandcamp). Diamond most recently produced Sadat X’s new album The Sum of a Man. The instrumentals are included on the limited-edition vinyl, which you can order at Bandcamp or Fat Beats.