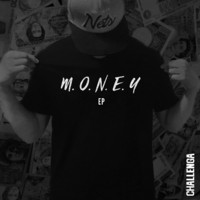 From Manhattan, New York, parents divorced at the age of 5. Relocated with grandparents in Hong Kong from age 5 to 9. Went back to New York and lived in Brooklyn with Mom and Brother til 14, mom remarried and moved out to Vancouver, Canada and lived there for a year and then moved again to Oakland California, attended skyline high for half of freshmen year and switch to Oakland High School. Graduated Oakland High school in 07 and attended University of California Davis. And that is all there is to know about Challenga from where he currently stands, with his first official EP entitled M.O.N.E.Y. Five original beats and raps make up this debut, most all the lyrics are very explicit but some of it inevitably not. All but one track is produced by 40K. It kicks off with come piano chords before blasting off with a solid rap on “604” which carries on about the usual rap commodities. It depends on how far back you go as a listener, regardless of how old the artist is, because they have-to reach back sometimes further than they even know they’re doing for influence. That is simply because one idea in rap can be handed down so far it doesn’t even matter where it comes from. All that matters, is how cool the lyrics go with the beats.

“Blow” proves to be even more of the above, as the EP progresses. But as-long as you’re of age you’ll get it with no problem and enjoy this track with the best of it all. I suppose there is an Eminem influence on this, at least to my ears which do go back to the roots of rap, but not enough now to be much better at spotting an influence here than that. If I’ve heard this anywhere before it’s likely coming from that direction anyway. It rocks and that’s the consensus after hearing it just once. That much is true, to honest about it. It’s also apparent that Challenga is good enough to fill a full-length album.

“It Will Be No Different” is all about keeping others from stepping on your toes, and he raps it off like no other with more seriousness than playfulness on this one, but you can still sense the underlying humor. He pulls it all off in a fashion you can’t beat with a stick, and the message does stick. Because as-long as he lives he can do what he does, and that’s just some of the message going on with this rap. But you can tell he wants to be taken very seriously on this particular-cut, so make no mistake it’s all for real the way he puts it over. If it were a rap off he’d take the prize all the way home.

“M.O.N.E.Y.” clocks in with the most fun to be heard, with a track most anyone mature can relate to. It’s about cruising around town with his ninjas, which is the most clever and original rap on the release. It drops a few names to tell some of his influences and it’s just another killer track, as they all are. This one tells all, and the rest is history but there is one more for good measure. It all closes with the slow grooving sounds of “Queenless.” The lyrics return with some more brutal honesty but that’s what Challenga is made of.