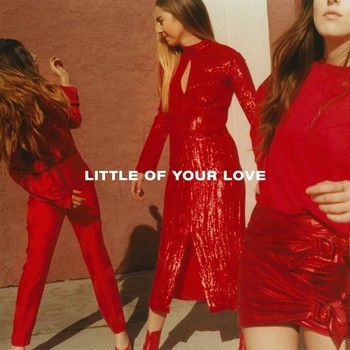 HAIM release new song, ‘Little Of Your Love,’ from their highly anticipated sophomore album, “Something To Tell You” (July 7 on Columbia). The new song premiered today as Radio 1’s ‘Hottest Record’ and is available online via all digital service providers. HAIM performed ‘Little Of Your Love’ last month on Saturday Night Live and Paste proclaimed the song as “absolutely infectious.”

“Little of Your Love” is the third track HAIM has shared from “Something To Tell You” following the release of “Right Now,” which included both a studio version and live in-studio video shot by Paul Thomas Anderson, and the first single from the album, “Want You Back.” The single hit #1 on Spotify’s Global Viral Charts and has been heralded as one of the best songs of 2017 so far by the likes of Billboard, Complex, Entertainment Weekly and more. FADER dubbed the song as a “pounding pop-rock tune,” and NPR proclaimed “with this new song they do illuminate, in a mosaic arrangement, the awestruck motions of love.”