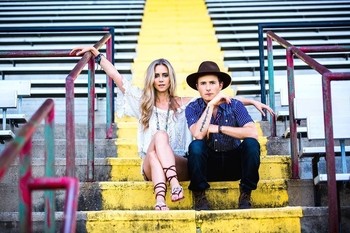 Think of the Grunge era, and a few iconic elements come to mind: angry guitars, angst-ridden laments, well-worn flannel shirts. But strip away the rage and rebellion, and what you’re left with are classic songs with unique, timeless melodies and meaningful, poetic lyrics. Those are the elements that husband-and-wife duo High Dive Heart bring to the fore on their new album, Grunge Lullaby, unearthing iconic rockers’ meditative core from beneath layers of raucous noise.

Make no mistake: Grunge Lullaby (out last Friday, June 16) is no kids’ album. It’s intended for listeners whose cocaine-fueled youth has ripened into a marijuana-mellowed maturity. For a generation whose formative years have been spent shouting along to Nirvana or Smashing Pumpkins, these songs still resonate – but sometimes the blistering volume and furious energy can feel like overkill given the frenetic pace of modern life.

At the heart of Grunge Lullaby are the sweet voices, tender harmonies and blissful arrangements of Jason Reeves and Nelly Joy. The album was recorded in their Nashville home studio and is steeped in a calm and intimacy that is unmistakably the result of a married couple making music in the comfort of their own home. That sense of serenity and ease – not the usual feelings that arise in Grunge music – is deftly transmitted to the listener, rewarding both those who want to enjoy these classic songs in a new way as well as those just looking to chill out without sacrificing their edge. This is music that’s about growing up, not growing old.