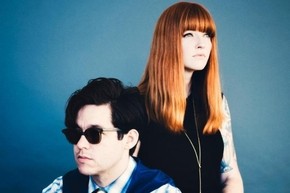 The title of La Sera’s fourth album says a lot by saying so precious little: Music For Listening to Music To. So, in other words, “music.” After the punky heft and wildness of 2014’s Hour of the Dawn, an LP that thrashed against expectation, Katy Goodman returns with a set of songs that double down on solid simplicity – the power of wry lyrics, glorious guitar, driving backbeat, and the occasional pump organ groove. And as the record cover gives away, Goodman isn’t alone. La Sera is a duo now – that’s guitarist/cowriter/new husband (!) Todd Wisenbaker standing up there. And Ryan Adams joins to produce the fruit of their union, La Sera’s first live-recorded analog album, featuring 10 tunes about good love, bad love, dead men, and confused kids.