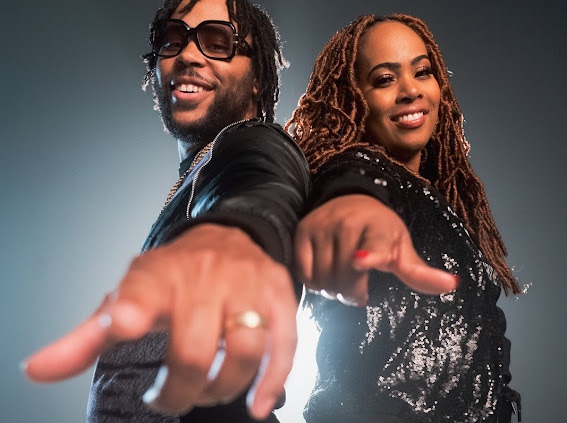 In the opening sequence of the radiant, inspirational video for “Royalty” by The Cofields, the light catches a pendant slung around Calvin Cofield’s neck. It’s not big — it’s a gold square about the size of a postage stamp — but it shines so brilliantly that it seems like it’s coming from the core of his being. That shine persists straight through Calvin Cofield’s fiery rapped testimonial to faith, the healing power of God, and the determination to resist temptation. Then, around the minute mark, the inscription on the pendant becomes visible: it reads Jesus Over Everything.

That’s the creed that The Cofields live by, and everything in the clip reaffirms that belief. Calvin Cofield stands back to back with his wife, Kimberly Rice-Cofield; they’re embattled (as we all are), but they’ve got each other and draw strength from their relationship and faith. Kimberly Rice-Cofield’s performance is sweet, impassioned, and magnetic, as she shares her testimonial and journey to motherhood. Delayed but not denied, the two received the promise of parenthood when their daughter was born, fulfilling a prophecy, in spite of challenges such as Kimberly’s diagnosis of PCOS. They’re a pair of irresistible vocalists with complementary styles, and their latest is further blessed by an epic, and contagious hook sung by award winning producer, singer and songwriter Luke G: a call to all nations to put aside wrongdoing and embrace righteousness. Luke G is also acknowledged for singing and producing multiple jingles on syndicated radio shows.

“Royalty” extends the Cofield mission beautifully, showcasing the pair’s understanding of song architecture and dramatic development alongside testimonials to the glory of God. Once again, they’ve combined hip-hop, gospel, R&P, and contemporary pop, harmonized it all and created a banger that’s sweeping the nations, all for the glory of God! Calvin Cofield and Kimberly Rice-Cofield produced the song alongside Todd “Throne Muzik” Johnson, and they proceeded with absolute unity of purpose on a song that fits the season like a star atop a Christmas tree.

Raymond Anderson’s clip for the song reveals that “royalty” is more than just an abstract concept to The Cofields. It’s also the name of their newborn child. Royalty Cofield is the third star of the video. Though she spends the clip in her mother’s arms, she’s dressed like a queen: her raiment is regal and red, and she’s got a bow around her little head. Royalty is a living symbol of the power of faith and prayer and the centrality of family and community. She’s also adorable. Together in faith, the Cofield family is ready to take on any challenge, reflect the Lord’s majesty, and shine like jewels in a crown.