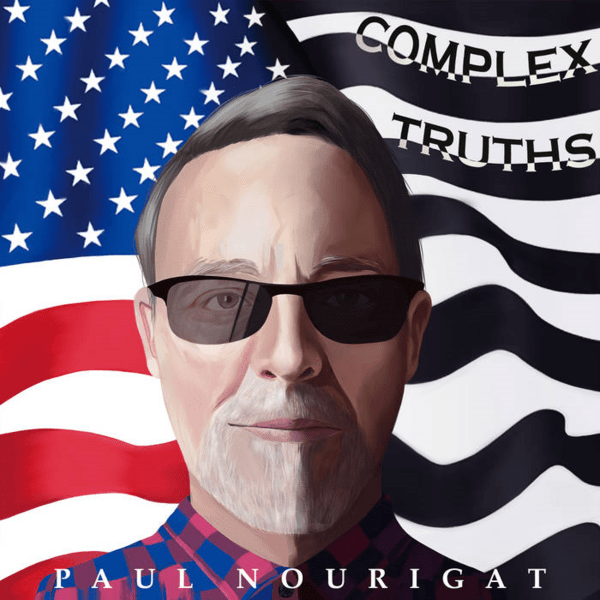 Paul Nourigat’s demos for Complex Truth will not appeal to everyone. These are three issue-oriented tracks that some listeners will dismiss despite their obvious musical merit. It’s a shame. Nourigat calls these demos but, excepting scattered hints of their sketched-out state, they come across as much closer to finished products than he gives himself credit for producing.

He gladly claims the Americana mantle for his music but expecting purist roots music from Nourigat is a mistake. There are subtle synth touches worked into the opener “Natural Stupidity”, for instance, and these additions never have the effect of compromising the song. The musical performances are even more impressive when you consider that Nourigat drafted his collaborators from around the world rather than locally.

He doesn’t have a polished voice, no question of that, but it earns your trust. Nourigat is “in the moment”, as many like to say, and his focus is total while managing to convey atmospheric nuance in each line. It results in a performance rife with emotion. It isn’t the sort of ham-fisted theatrics you expect to hear from pop songs either . Instead, has a theatrical bent. He isn’t dwelling on disposable matters but, instead, speaking directly about the time we live in, and it makes for gripping listening.

The slow drawl of Nourigat’s voice is very effective during the second track “Bad Cannot Be Good” and the musical arrangement follows his lead. He peppers the arrangement’s overall restraint, however, with piercing near-lyrical guitar lines that burst from the mix. The playing never overwhelms listeners but, punctuates the performance with flair.

The lyrics are arguably less angsty and confrontational than those heard during the opener. Nourigat promises he’s making every effort to avoid taking explicit party positions with his politics and comes through on that. It isn’t this quality, however, that helps the material stand out – instead, it is how he focuses on issues that, unfortunately, have plagued society to greater or lesser degrees since we first organized governments. These songs have small details that will strike listeners odd ten, twenty years, or beyond into the future.

The demo for “These Old People” is another track distinguished by stinging lead guitar. There’s more that’s powering this track than that. But, one of the consistent highlights of these demos is the guitar playing. This demo breaks from the subject matter prevalent throughout the other two, but you get some sense of the same personality emerging from the songwriting. Paul Nourigat’s Complex Truths demos definitely make forceful lyrical and musical statements and leave listeners wanting more. These songs, especially the first two, are compositions that have simmered within Nourigat for some time. Many listeners encountering Nourigat’s talents for the first time will hear a kindred spirit.