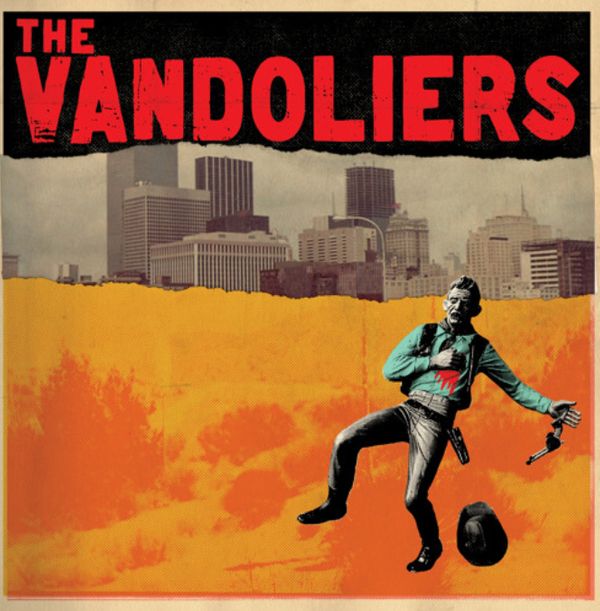 Currently out on their first European tour, opening for Turnpike Troubadours at the Ryman July 29th, touring U.S. with Old 97’s and Mike and the Moonpies this fall

On new single “Howlin’”, Texas country punks Vandoliers loudly meditate on love and longing through the lense of a dog missing their owners. Fiddle and harmonica cut through the pounding drums and amped up guitars, with the song crescendoing into a chorus that’s as big and anthemic as Vandoliers vast home state. “Howlin’” is a standout from the band’s upcoming album The Vandoliers, out August 12th via Amerikinda Records/Soundly Music.

“In 2019, I wrote ‘Howlin’’ while my family dog cried by the door waiting for my mom and dad to come home, explains Vandoliers frontman Joshua Fleming. “It took no time at all before I had a complete song of lyrics depicting the pain of loss and a friend long gone. I love this song in its innocence, and the simplicity of ‘I miss you.’”

The video for the song follows a dog (actor Zack Green dressed as a punked up, human size dog) as he thinks he’s been abandoned by his owners. A trip to the bar, too many drinks and some back alley hijinks ensue.

Vandoliers are a uniquely Texas band, distilling the Lone Star State’s vast and diverse musical identity into a raucous, breakneck vibe that’s all their own. After spending much of the last three years furiously writing and recording music, this Dallas-Fort Worth six-piece is back with The Vandoliers, a new album that proves these rowdy, rollicking country punks are tighter, more cohesive and more sonically compelling than ever. Few bands can spend a month on the road with punkers Flogging Molly and then turn around a week later and open the first two reunion shows for independent country legends the Turnpike Troubadours, as Vandoliers did earlier this year.

The band are currently in the middle of their first European tour, and open for Turnpike Troubadours again at the Ryman Auditorium in Nashville, TN before launching their summer headlining tour. Vandoliers will also tour across the U.S. with Old 97’s in September, and today they’ve announced an October tour with Mike and the Moonpies.

Few bands can bring together the square toes and the steel toes quite like The Vandoliers. As its members have grown and matured, so has the sound of The Vandoliers. But what remains the same, though, is the band’s core philosophy of solidarity and hope, evidenced by the motto they’ve all had tattooed on their arms: Vandoliers Forever, Forever Vandoliers.