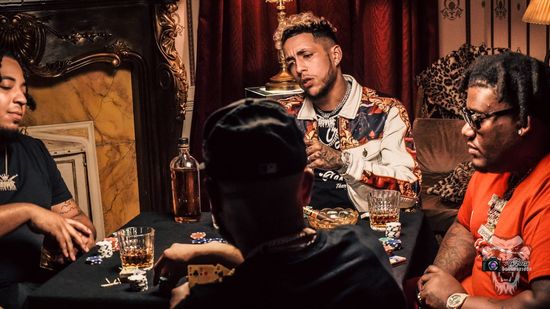 Born in Hyde Park Cincinnati, Alpha Hugo knew as young as 10 years old that music was his destiny. It’s not often within the entertainment business that you find an artist who has truly taken the journey, the grind, the sacrifice and also the determination necessary to succeed and grow within this business. If you ask him he will tell you music saved his life. Growing up near Atlanta home of a roaring hip-hop scene and raised in a musical family his mom would listen to country and pop while his father listened to rap and reggae. Today, Alpha listens to a wide range of industry legends, including Drake, Future, Roddy Ricch, Adele, Luke Combs, Lewis Capaldi, and more. At this early stage of his own rise to stardom, Alpha Hugo already sees indispensable value in his fans. He has demonstrated openness and sincerity in each release and genuine interactions beyond the music. Ultimately, Alpha Hugo’s ability to make people feel real emotions through his music makes fostering this bond and garnering support and appreciation for his creative work come naturally.

Hanging poolside in Atlanta, Alpha Hugo is surrounded by hot women swimming and lounging in their bikinis. The verses in “Go Crazy” are loaded with details about Alpha Hugo’s extravagant life as a first-rate rapper making a steady rise to fame. He has got the shiny watch, all the diamond chains, and the money from his successes to date to flex it in this visual. In each round of the chorus, Alpha Hugo’s attention gets turned onto the ladies’ voluptuous bodies going crazy in the summer sun, coercing him to want to get crazy with them. Behind his fire bars is a dynamic instrumental with heavily drum-driven beats that make it almost impossible to sit still while listening.

In “Cancer Symptoms,” Alpha Hugo shares a more personal, visceral side of himself. Not too long ago, Alpha Hugo found out he would be fighting the battle of his life with stage III Hodgkin lymphoma. At just 21 years old, not knowing what his future held, he grew up mentally and realized he had so much more to live for. He said, “I made a decision that day. I was like, ‘Look, if I’m going to die, I want the odds to be that I die in front of a microphone.'” So, he recorded an entire project which included “Cancer Symptoms,” showing the world what he went through trying to stay positive and triumph through his sickness. In both singles and their music videos, it is clear that Alpha Hugo is doing what he loves.