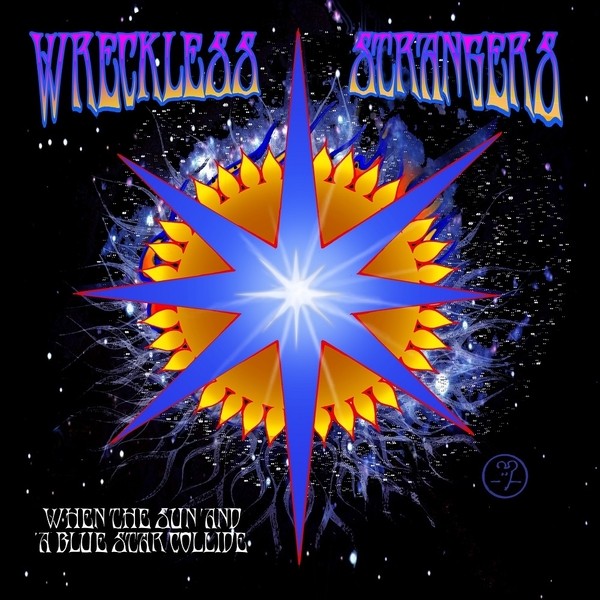 Some bands can almost do it all. No band can, of course. Everything human is finite. There are at any given time, however, a handful of publicly visible bands who can cover a wider stylistic gamut than their peers and contemporaries. Some more than others, of course. California’s Wreckless Strangers play music they label “California soul” but it’s really just a fully-realized and very individual mix of rock, soul, and strands of Americana music into an unique yet recognizable concoction. The band’s album When the Sun and a Blue Star Collide isn’t your typical release in this vein.

I don’t believe the band’s musical pantheon reveres the Stanley Brothers, Merle Haggard, 60’s R&B, blues, rock, and soul as much as it escapes the long shadow of such artists while still making the genre an effective vehicle. Modern influences in this tradition are audible throughout the album as well. A great example of the present and past occupying the same songwriting space on the album is its first song. “Sun State” won’t be a departure for young music fans far more familiar with the Alabama Shakes or other similarly retro-minded outfits and recruiting Charlie Musselwhite to add his harmonica to the song is a crowning touch. It grounds this bluesy blast in the past while still staying in the here and now.

A peak moment on this album for me is the early pivot from this track into “My Art”. I’m certain I won’t be the only one who hears this as a band essentially saying listen to everything we can do with a deeply felt yet profoundly artistic track such as this. David Noble’s singing and songwriting embraces a relatively unusual subject, but there’s layers and ways of appreciating this song that opens its possibilities.

“It Is What It Is” is an elegiac sounding track, a near-ballad, and a quasi-duet to boot. Amber Morris and David Noble’s voices are quite compatible with one another without even a single instance of one stepping on the other’s toes. Joshua Zucker’s bass is particularly standout during this number. Austin de Lone’s keyboards are the primary instrumental accompaniment during “Can’t Recall”, though it’s far from the marquee attraction. That distinction falls to the vocal, half sung half spoken, that’s sharply at odds with its predecessors and successors. It has a level of arch theatricality we don’t hear elsewhere on this release, at least not to such an extent. It isn’t a goofy or overwrought affectation, however.

Everything comes together during “Alexa”. This is a modern soul raver in the traditional of the best R&B, moderately paced, and instrumentally wide. de Lone’s keyboards are, once again, a key cog in the song’s machinery, but each of the players acquit themselves well. The album’s penultimate track “State of Grace” has a rocked up country slant, as do most of When the Sun and a Blue Star Collide’s songs, and the lyrical content further elevates it. There isn’t a single song I can point to as an outright grand slam, but Wreckless Strangers have produced an album of fourteen home runs – a rare feat in any period.