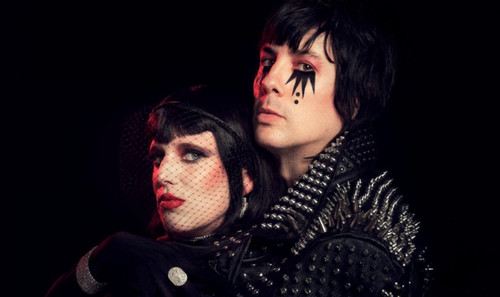 Four years in making, Toronto artist Barzin is releasing his fifth studio album ‘Voyeurs In The Dark’ on Friday this week. That the album is more cinematic in its scope and conceptual in feel than his previous studio albums can be attributed to the time he spent over the past several years composing the soundtrack for the independent film, Viewfinder.

Today, Sean Nicholas Savage announces his new album Shine, set for release July 22nd via Arbutus Records. The Canadian songwriter also today shares the title-track from the LP and provides detail on an imminent European tour, which includes a London date on May 11th. The new record, recorded and produced by Mac DeMarco, is about recapturing the will to live after a period of sadness and stagnancy, and the return to positivity and hope. All wrapped up in music that adds a sense of rhythmic guitar-based folk intimacy to Savage’s hallmark ebullient avant-pop sound.

Bringing with them into the studio that same high intense energy their listeners experience live Ventruss continues to carve their name across the defining edge of the southern Hard Rock/Metal scene.

Emerging from varied genre backgrounds, Boston-formed quartet Corner House’s unique strength is their desire to learn from one another—not only in musical skill and style, but in life experience—such that every challenge overcome by one band member becomes part of the group’s shared musical and personal DNA. On their upcoming full-length debut, How Beautiful It’s Been, the band—songwriter and guitarist Ethan Hawkins, Scottish fiddle player Louise Bichan, bluegrass mandolinist Ethan Setiawan, and cellist Casey Murray—reveals the sublime result of that growth mindset, with a singular sound that incorporates old time, Scottish, progressive bluegrass, and folk music, with the help of their collective mentor and the album’s producer, Scottish harp virtuoso Maeve Gilchrist.

Structured in two halves, “a connection to all things” starts like a morning sunrise in a deep forest. A few ascending notes of a flutey melody quickly gather into a swirling cycle of breathy synths, warm reverberant percussion, and rolling subsonic bass echoing the contemporary new age ambient pieces of Kailtyn Aurelia Smith and Emily Sprague. But with the entrance of Clarice Jensen’s (Johann Johannson, Max Richter) soaring strings, pulsing between major and minor chords, the piece transforms into a starkly beautiful lament for the ephemeral nature of beauty; more akin to the hauntingly austere sounds of scandinavian composers like Johann Johannson or Olafur Arnalds.

OUT NOW: dj poolboi Unveils ‘felt like we were in heaven’ video [FFO: Kiasmos, Christian Loffler, Parra For Cuva]

“I am so happy that, after a year’s wait, we’re finally getting some new songs out into the world,” says TITE guitarist/vocalist John Treanor. “I hope that fans can see the growth happening in the band’s sound. The songs are getting better and better, and we’re less focused on walls of guitars and getting into some cool territory with the vocals.”

DESIRE SHARES ““LOVE IS A CRIME”; NEW ALBUM OUT MAY 3 ON ITALIANS DO IT BETTER

“Love Is A Crime” kicks in with a girl group-styled narration “Calling After Dark…Trying To Break My Heart”. A lyrical nod signaling that the song features the illusive After Dark artist, Mirage, in a duet with Desire. Asking the question…is true love a crime? Electro boogie synthesizers spar with distorted vocals chanting the words “There’s No One Left To Hold You”. The flame of love attempts to connect via dial-up internet service in the track’s outro.

Telling the story behind the video, Mike Florentine shares “‘Brandon Boulder’ is about an ex-friend of mine and his shitty ex-girlfriend. They would fight and complain like it was a soap opera all day and all night and that’s what this song is about. The video for this song was filmed way back in 2019. We filmed the video on the beach in Union Beach, New Jersey with Eric DeCarlo of SquareUp Studios. He’s worked with the likes of Attila, Fit For An Autopsy, Emmure, Lorna Shore, Shadow Of Intent, Gideon, Left To Suffer, Bodysnatcher, & many more. The video it’s self was an experience in its self. It was 95 degrees outside & as much as I thought that Parkway Drive & Breaking Benjamin were on to something about beach videos, I was dead wrong. But besides getting eaten alive by horse flies the entire time it was a great experience. Something that I don’t think people know about the video is that Eric used a drone at some points for the band shots”

They Hate Change, the Tampa Bay production/rap duo who recently signed to Jagjaguwar have released the last single from their forthcoming album Finally, New out May 13th. “Some Days I Hate My Voice” is Vonne’s speaker-knocking ode to androgynous gender euphoria, complete with shout-outs to 100 gecs and 60’s trans soul star Jackie Shane. Of the track Vonne notes:

Produced by Live Nation, the Long Live Montero tour will make stops across North America and Europe this fall. The North American leg kicks off at The Fillmore in Detroit on Tuesday, September 6th, and will make stops in Chicago, Nashville, Los Angeles, and more before wrapping up in San Francisco, CA at the Bill Graham Civic Auditorium on Sunday, October 23rd. The European leg begins Tuesday, November 8th in Amsterdam and concludes Thursday, November 17th in Barcelona, Spain.

On ‘From the District to the World,’ “Los Angeles’ next great storyteller” (Earmilk) pays homage to Crenshaw while exuding mass appeal beyond his cult-like Californian fanbase. His 2020 debut album ‘Save Yourself’ was an introspective glimpse into Nana’s psyche, but this release hears Nana fine-tune his storytelling abilities to honor the South-Central neighborhood that raised him. Noteworthy new tracks include “DontPlayDat,” a quippy rebuttal to the haters featuring Zoink Gang member (Guapdad 4000, JID, and Smino), Buddy. “Live From The District” is another feat for Nana, which hears him spit fast tempo bars about overcoming the adversity that shaped him into the force he is today.

Beloved American singer-songwriter Townes Van Zandt passed away at the age of 52 on January 1st, 1997, in Mount Juliet, Tennessee. His music touches people. Many believe he was a genius, and sing his sad, brilliant songs. Imagine if he was still creating music, in a time when artists themselves decide what to release and when to do it – something that songwriters of his era often were unable to do.

As Richmond, Virginia hardcore outfit ARMAGIDEON TIME prepares to release their Crime As Theatre debut through Anti-Corporate Music in May, No Echo is hosting an exclusive premiere of the EP’s “Stimulus Fuck.”

On “Gold Keys” Chuck Brown (Huntington Beach, CA) delivers a classic, boom bap banger, complete with DJ cuts, a trunk rattling instrumental and a scorching guest verse by Sick Tricks. Both Chuck and Tricks’ verses are masterful displays of writing and delivery, while PhDBeats lays a raucous soundscape, setting the aggressive tone for the track. Veteran DJ, DJ Hectik1, provides cuts on the chorus to complete the authentic feel of the record. This is the second release from the “Chuck’s Corner” series, following “B.L.B.S.”

“‘Under The Gun,’ a nod to some of Metal´s all-time greats like Ozzy and Dokken, comes out with a banging video, inspired by Sergio Leone´s Spaghetti Western movies and Tarantino-esque cinema,” explains Archie Cruz. “The video was shot in Joshua Tree on April 7th with Industrialism films and the director Vicente Cordero. The plot is about four gunslingers having a Mexican stand-off for a suitcase full of cold hard cash.”

The album is an intimate look into the relationship between Dany Placard and Doiron. Written and recorded during the mandatory isolation between New Brunswick and Quebec, these songs are born from the complicity that enlightens the couple’s everyday lives.