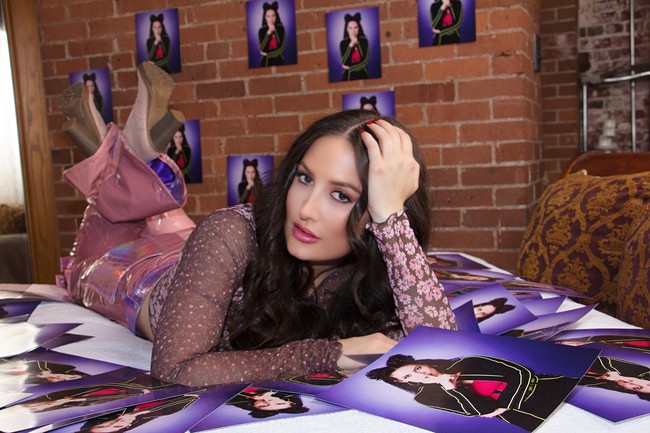 At first glance, having an “Affair With Yourself” might not seem like it’d be as gratifying as a liaison with the attractive stranger at the other end of the bar. But stop, wait a minute and don’t judge this video by its title! This is about empowerment and knowing, you don’t have to be bullied or be in a bad relationship. This is about being absolutely fine in the company of as the lyrics tell it…Me, Myself and I and an “Affair With Myself”.

Dance-pop artist Harper Starling has once again teamed up with her co-writing partner in crime Cindy Valentine. This duo are accustomed to writing, persuasively and with great emotional accuracy, about the perils of the dating game. Harper dedicates the witty “Affair With Myself” to her next three lovers: “me, myself, and I.” But behind the irreverence and good humor lurks a lyric about a serious subject i.e. verbal abuse, bullying and disrespect. The team love to write about relatable subjects and in this case, who hasn’t been bruised by a bad relationship and determined to reclaim their autonomy. Harper takes us on a necessary journey of recognizing bad behavior and reclaiming your power — one where anyone and in this case Harper might catch her balance and mend her wounded heart. The strength in this is to remember, It’s better to be by yourself than in bad company.

Harper also has a treat for longtime fans of Teen Witch: child star and former CBS/Sony, Polygram, and Arista recording artist/composer Cindy Valentine, who’s also the producer and co-writer of the track, makes a cameo and harmonizes with Harper on the song’s bridge. Valentine is an auteur and trailblazer and considered a heavy hitter in the music industry. She’s been an inspiration and mentor to Harper Starling. On “Affair With Myself,” Valentine has matched Harper’s powerful vocals with a track that could be this summer’s beach fun, dancefloor, feel good inspiration. It’s propulsive, wildly catchy, a little cheeky, and the continued theme to all Harpers songs…empowering!

Like most of Harper Starling’s videos, they specialize in storytelling clips, and “Affair With Myself” doesn’t disappoint. Story written by Cindy Valentine who also coached Harper along with Director Luke Camozzi treats us to plenty of shots of Starling on a date with a boyfriend, Canadian actor/influencer, ‘Julian Mete’ who isn’t making the grade: he’s rude, greedy, and loud, and he’s clearly stifling his partner’s self-expression. We see Harper take her power back and the transformation of self confidence once she is on her own and in the safety of her own home. Harper regains her power in a way that she couldn’t when she was with a partner who was looking (and talking) past her. Soon enough, we know all she ever needed was herself.