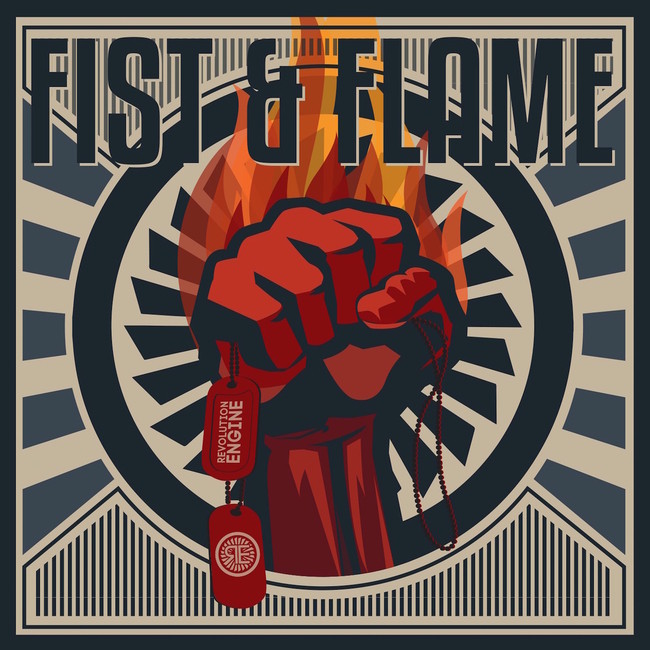 Revolution Engine may have written the songs for their album ‘Fist & Flame’ a couple of years ago, but there’s not been a moment that we need these tracks like right now. Listening to this album is a completely immersive, arresting experience. They speak some serious truth. Truths have long been known, but perhaps only now are being fully understood. This whole album is a clarion call to the conscious listener. A clarion that sounds more like a perfect fusion of hard-rock, hip hop and moments of metal. Made up of vocalist Kenny Canoe, guitar master Glen Peters, bassist Ryan Laurie and defiant drummer Krishna Ray, Revolution Engine have carved a space for their uniquely assertive, aptly aggressive and chaotically captivating sound.

‘Fist & Flame’ is a riot of a record. Kenny Canoe’s vocals are a serious standout from start to finish. From passages of spoken word, scream-singing sections and some pretty impressive belts, he commands this album with overwhelming vocal expression. ‘Bullet the Blue Sky’ is an arresting moment of metal-infused vocals as Kenny’s death growls soar through the speakers. In the opener ‘Juggernaut Generation’ Kenny’s captivating confidence makes the spoken word section one of the most memorable moments on the whole album. ‘Business Suit Bonfire’ flexes the fierce force of Glen Peters on guitar. His riffs sculpt the foundations of the soundscape, made all the funkier with Ryan Laurie’s bounding bass lines below. This track is one of the most badass bangers I’ve come across in a while. Revolution Engine demand that we see through the hypocrisy of the corporate machine. It’s hard not to get riled up by the harsh truths in this track, translated through the catchiest hook out of the eleven tracks on this album. If it’s headbang-able drums you’re looking for, jump straight to ‘Dying To Love’. Krishna Ray is outstanding in this one, with phenomenal fills and dynamic drum lines that start the charge of the whole track. He’s the heartbeat of the explosive whole album. He fuels the fire. Glen and Ryan keep it stoked. Kenny pours on the poetic gasoline. ‘Fist & Fire’ is a perfect storm of genre and meaning. Despite being released a while back, Revolution Engine is a significant soundtrack for the state of the world right now. They’ve been sounding the horn for years now, it’s about time we all woke up and listened.