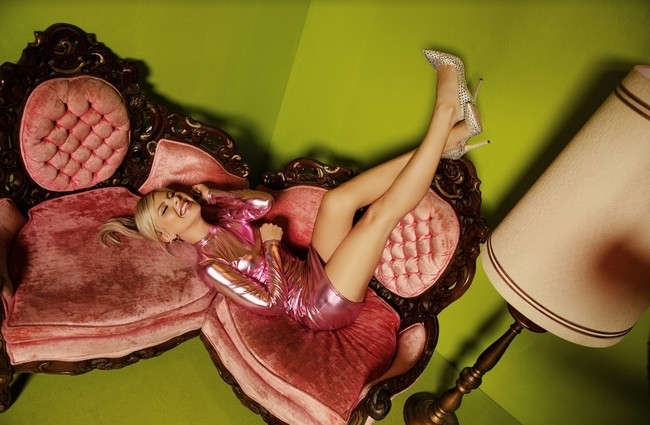 “The smaller the forest,” Ksenia tells us, “the bigger the dream.” She’s speaking from personal experience. The rapper and singer comes from Nakhodka, a town on Russia’s chilly West Coast, three hours into the woods from Vladivostok. It’s one of the prettiest places in the world — and also one of the most remote. A girl from a forest like that is bound to be an unusual person: independent, resourceful, physical, ungovernable, and quite likely beautiful. If Ksenia is as the forest made her, well, we all owe a word of thanks to the forest.

She’s also cultivated a great sense of humor in those distant Pacific pines. “Girl From The Forest,” her new single, pokes fun at her upbringing and the assumptions of outsiders and pokes the Russian bear in all sorts of friendly, provocative ways. She sends up rural living, namechecks the KGB and dudes named Boris, confesses a predilection for vodka and caviar, and tells us, quite convincingly, that she got her swagger from the trees. Ksenia even closes the track with a “kalinka, malinka” chant that will be familiar to anybody who is familiar with Russian folk music. (And if you aren’t, that’s “snowberry, raspberry” to you.)

If clever lyrics and adroit cultural references were all there was to “Girl From The Forest,” the song would still be well worth playing. Ksenia is a generous tour guide, and her love for Nakhodka is apparent, even as she cracks wise about it. But Ksenia is also a subtly talented rapper — a born storyteller and phrase-turner with a wry, friendly delivery, an impeccable sense of time, and an easygoing charisma that’s impossible to resist. She’s light on her feet as she rides the beat, but she never loses her footing or breaks the connection with the listener. Once you’ve heard her distinctive voice, you’re not likely to forget it or ever mistake her for anybody else.

The “Girl From The Forest” clip is similarly indelible. It’s funny, lively, playful, occasionally electrifying, loaded with personality, and it presents the star as a wood nymph with visible self-possession and an evident sense of mission. She’s not alone: she’s brought along a balalaika-playing bear and a fellow forest dweller (presumably named Boris). When the scene switches and she’s in an American club, they come right along with her, and they remain her retinue until a little too much vodka pushes the party to a dangerous, humorous, uproarious brink.