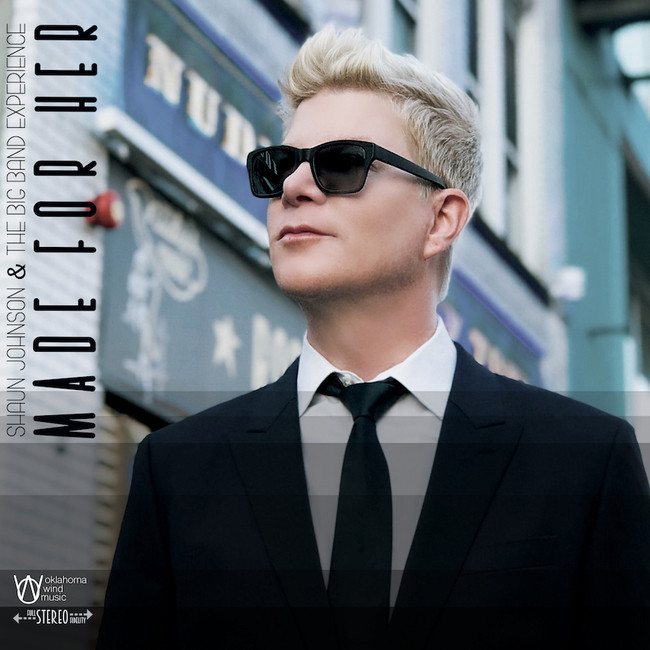 Shaun Johnson + the Big Band Experience tells you everything that I could summarise about this class act in the name itself. You’ve got Shaun Johnson, the Emmy award winning vocalist who shot to fame with the vocal group Tonic Sol-fa. Then you’ve got a Big Band boasting musicians who have toured with the likes of Aretha Franklin, Robert Randolph and the Family Band and New Kids on the block. Need I go on? This relatively fresh band on the block offers up a newly revised nostalgia. Think the Sinatra sound meets the new age. The group’s own quote that they “indelibly stamp vocal jazz and swing with a contemporary punch” couldn’t be more apt a description for Shaun Johnson + the Big Band’s debut latest ‘Made For Her.’

‘Made For Her’ is an album rich with intoxicating, easy going flair. Kicking off the album, ‘Sing For Me’ is a prime example of this. It begins with a stunning jazz introduction, showcasing the astounding vocals that inaugurate Shaun Johnson as the Emmy award winning vocalist we’ve come to adore. The track swiftly bursts into the vivacious energy you can expect from the group of big band pros. Although they are self-professedly a “stripped down band,” their sound is bursting at the seams with slick solo lines, bold brass lines and flawlessly fluid interplay. ‘Sing For Me’ flexes every inch of this group’s rich sound. ‘All Because of You’ is another standout as Shaun Johnson veers into the beautiful realms of a ballad. Gentle guitars set the backdrop for his stunning vocal line. Shaun Johnson performs with a seriously powerful prowess, effortlessly weaving through the intimate moments, leaning into the bolder throughout ‘Made For Her’. Well, what can you expect from such an experienced vocalist? Nevertheless it’s a treat for the ears. ‘Say Goodnight’ proves you really can’t pin down Shaun Johnson to any genre; the electronic atmosphere allows the vocalists to sail over with a stunning spotlight. ‘Love Me Tender (LIVE)’ concludes this treasure chest of musical magic with a charming touch. Being the only cover on the album, Shaun Johnson + the Big Band Experience have crafted a captivating cover that holds space for Shaun’s tone to take a hold of the original and mould it into a mesmerising moment to end the album. Whilst ‘Made For Her’ was written as a homage to the influential women in Shaun’s life, it’s of no doubt each of us can find something special within this beautifully crafted album.

Listen to ‘Made For Her’ on SPOTIFY | PANDORA | APPLE MUSIC | AMAZON

Find Out About Gig Dates on BANDS IN TOWN