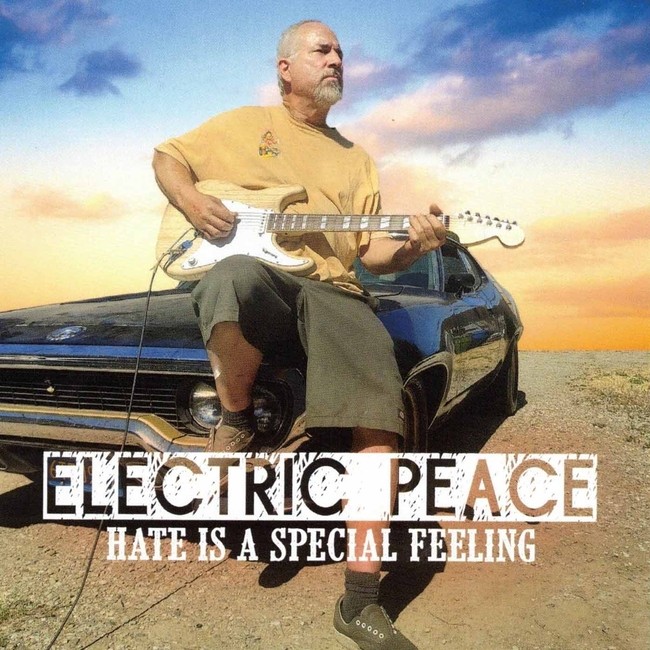 Electric Peace’s “Hate Is A Special Feeling” begins with a dirty electric guitar riff, before an ominous, scratchy vocal comes in. It sounds like a psychedelic workout from the ‘60s, even though it’s a 2021 single. Nevertheless, this song seems to want to recreate music from the psychedelic era for today’s listeners.

Sonically, this song’s mix is a little messy – intentionally so. The instrumentation is mixed way up so it’s nearly competing with the vocal. Both the music and the singing are integral to the overall sound of the song. About mid-way through the song, there’s a really nice slide guitar solo.

You’ve got to imagine Electric Peace is being sarcastic with this song’s title. Hate is not a positive emotion, thus it’s not ever a special feeling. It’s almost as though the act is encouraging hatred. Of course, nothing could be further from the truth. However, both socially and politically, hatred has seemingly never been more prevalent and popular in our world. Just look at the recent BLM protests, for a quick example. Many Black people hate the police and are calling for police defunding. Police likely don’t have much love for BLM protesters. You’d think the recent covid pandemic would bring people together. It hasn’t. Those vaccinated blame the unvaccinated for the spread of the virus, while the unvaccinated dislike those vaccinated. Our world is finding countless ways to express hatred, unfortunately.

Honestly, though, one must wonder how effective Electric Peace will be with this sarcastic little single. Will a heart filled with hatred hear it and immediately turn from its wicked ways? That’s doubtful. Sadly, people on each side of polarizing issues rarely change their minds and switch sides. Instead, each party just digs in deeper into its position, stubbornly refusing to give even an inch.

The guitar on “Hate Is A Special Feeling” sounds a bit like the intro to a Doors song. In fact, it sounds like a speeded-up intro to that band’s “Roadhouse Blues.” It’s both faster, and more mechanical (less bluesy) than that hit song.

Brian Kild leads Electric Peace. His voice is dark during this song’s verses but becomes smoother and more melodic at the outset of the track’s chorus. It’s almost as if he’s secretly revealing the evil side of hatred during each verse, then becomes sarcastic and faux-positive about this emotion when he sings the track’s chorus.

After singing the last line of the song’s chorus, “Let that feeling grow,” the song suddenly just stops. There’s no fade out. No auditory warning. Just silence. Kild has said his piece, so he’s done. It’s sad how so many of us understand this song. Thinking back to the ‘60s, we could sure use another era of peace and love. Boy, those hippies certainly are a long way away from today’s generation. Political parties on the left and right don’t just disagree with each other; no, many literally hate each other. So, how will we ever bridge this divide? It’s tough to see a light at the end of this long dark tunnel. Hate may be a ‘special’ feeling, but love is the greatest feeling in the world. May we all feel a lot more love soon.