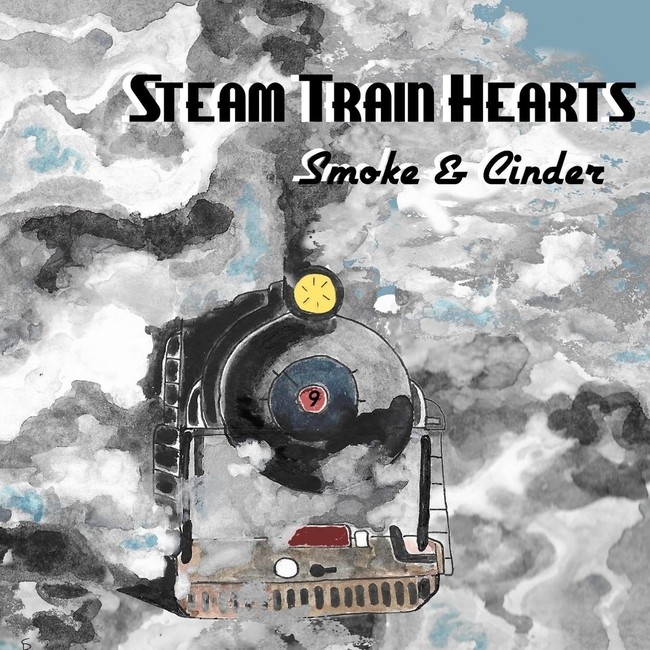 Steam Train Hearts are a source of a pretty sweet sound. Fusing the fundamentals of the ’80s, indie, rock and pop, this four-piece are a force to be reckoned with. The group got together through the union of the Silent Boys’ singer Wallace Dietz and the guitar genius of Bruce Smith from the Dismal Swamp Lords – it’s the fusing of these varying sound styles that make Steam Train Hearts so exciting. Their debut album ‘Smoke & Cinder’ is electric with the eclectic mix of influences that swim throughout their sound, from rock to ’80s energies to folkier fundamentals. The seventh single from this diverse body of work, ‘Uncertainty,’ is no different.

‘Uncertainty’ roots run deep in the rockier realms. The track boasts thick, divinely distorted guitars that melt into the mix. Guitarist Bruce Smith provides sweeping countermelodies that fuel their melody focused indie sound and seem to sail over the grungy soundscape below. These intertwine effortlessly with vocalist Wallace Dietz’. Wallace’s powerful vocal presence carries this track to new heights. His punchy tone cuts through even in the chorus crescendos and holds the sort of vocal character you can’t help but emulate as you sing along. At least, I did. The band’s ‘human metronome,’ Blee Child, flexes every musical muscle in this track. Each break is bursting with energy and the dynamic drum lines propel ‘Uncertainty’ forward with effortless electricity. Married with bassist Kyle Hermann solid supporting lines, they create a solid foundation for the intricate melodies to reign supreme. ‘Uncertainty’ has the kind of catchy melody that creeps in chorus after chorus — and in a somewhat saturated field like indie rock realms, Steam Train Hearts truly hold their own. Whilst expanding on a genre of grungier indie-pop, ‘Uncertainty’ feels totally fresh. Steam Train Hearts have penned a pretty hardcore hit and in a year when uncertainty has been the only thing that’s seemed certain, it’s refreshingly relatable too.

Listen to Uncertainty on BANDCAMP NOW