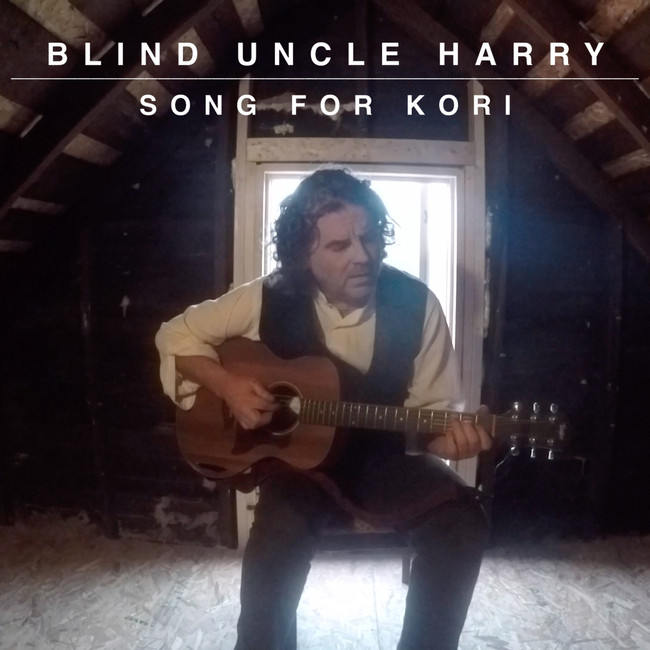 Blind Uncle Harry is back with another single set to tug at our heartstrings this month. ‘Song For Kori’ strays slightly from the self-defined ‘hillbilly hippie shreddin’ folk rock’ that he is best known for, but is still rooted in the folk foundations at the heart of his sound. This latest single comes off the back of his astonishing album ‘The Gospel according To Blind Uncle Harry’ from last year. One of my favourite soundtracks right now, this album consists of twelve tracks that ooze a sweet, soulful sound, all whilst making me ponder the nature of our constructed lives. Blind Uncle Harry had me singing along with glee whilst contemplate the structures that surround me. For me, that is a match made in heaven.

‘Song For Kori’ is a beautifully honest, open and emotional lament in the delicate form of an acoustic ballad. Blind Uncle Harry’s vocals stand front and centre with a powerful presence. With incredible intimacy, he tells the tale of a man and his daughter, Kori. The heartfelt beauty of this song lies in the unaffected nature of the production. The vocals have an unwavering vulnerable feel — no extravagant production, no unnatural elements, and, trust me, they aren’t needed. The refreshingly raw and natural recording of this track is what stopped me in my tracks. The repeating guitar pattern becomes a comforting melody, a heartbeat-like symbol that grounds us through the twisting tale sung above it. Marrying the tender guitar with the unfolding lyrical lines, Blind Uncle Harry allows moments for this heartbeat to diminish and to thrive, to grow fainter and to strengthen, pushing and pulling you through the heart-wrenching story of Kori being told. It’s this picturesque musicality that inaugurates Blind Uncle Harry as such an incredible storyteller. On the surface level, ‘Song For Kori’ is a tragic tale of father and daughter. On closer inspection, ‘Song For Kori’ is an acutely accurate depiction of the unjust and broken systems that are ruining lives in some of the richest nations out there. If being an artist truly is having something to say and saying it with style, then Blind Uncle Harry, in every dissection of the word, is an artist.

Listen to ‘Song For Kori’ on BANDCAMP NOW

Watch The Music Video for ‘Song For Kori’ on YOUTUBE NOW