Sometimes the most moving love songs aren’t sung to other people. That’s particularly true in country music, where passionate devotion to small towns and back roads is often expressed in verse and melody. Casey Ahern’s latest single “Bradley” can be heard as a musical Valentine to a man named Bradley: a solid, dependable sort whose strong and embracing arms are difficult to resist. However, listen closer, and it becomes clear that the Nashville-based singer and songwriter has a different object of affection in mind. Her heart belongs to her ranch, a place of repose in the vast rural reaches of the Golden State. 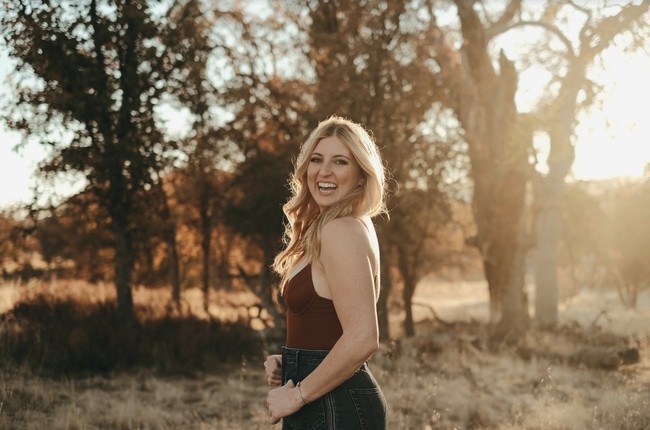 Bradley, California isn’t very big: it’s less than a square mile, and its population is under two hundred. But as anybody who has traveled on Highway 101 knows, it’s a place of astonishing natural beauty. Tucked away from the mainstream along the Salinas River, nestled in between the coastal mountain ranges and the fertile farmland in the central valley, Bradley is equally remote from both major California metropolitan areas. It’s a town designed for reflection, and during the long quarantine period, Casey Ahern took refuge there, busily writing, communing with the natural world, and channeling its spirit. Much of Where I Run, her gorgeous new EP, was written there, and the shadows of those golden hills fall gently across the entire collection.

If the themes of “Bradley” are bucolic, the circumstances of its production were anything but. Casey Ahern recorded the song in Nashville with the assistance of some of Music City’s finest musicians and producers. For “Bradley,” the Buzz Brothers were behind the boards, and the band featured veteran players who’ve worked with Shania Twain, Eric Church, Tim McGraw, The Band Perry, Kelsea Ballerini, and other stars. The result? A dream of the country realized in the middle of the city – a gorgeous, sun-drenched California hallucination brought to life by the finest country traditionalists.

There’s a handsome cowboy in the “Bradley” clip, and there’s plenty of footage of Casey Ahern, too, looking lovely under the summer sun. But the real star of the video, naturally, is the Bradley ranch, which is absolutely stunning in its rustic majesty. This is indeed a place to get lost in – rich soil in which dreams can take root. In the clip, Casey Ahern is practically part of the land. In the cold air of her city apartment, she’s uprooted. When she’s on her back in the Bradley grass, she’s absolutely at home.