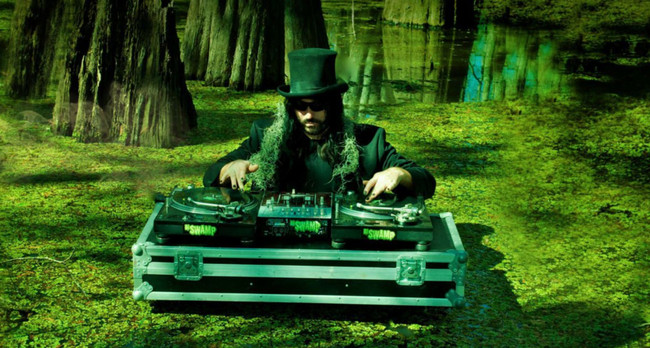 DJ Swamp should need no introduction and is a well known American hip hop DJ, turntablist, producer and vocalist. Swamp began mastering his DJ skills more than 15 years ago. In 1996, his rookie year, he took the title of USA DMC Champion. Being true to his nature in an arena that was predominantly influenced by a very hip hop-esque culture, Swamp stepped up to the decks looking like some kind of junky punk. He was well received by the audience despite his counter-culture appearance because he exhibited skills that defied perception and already possessed a stage presence that many of his contemporaries still lacked. The finale came when he closed his set by freakin’ Deep Purple’s ‘Smoke on the Water’ and then smashing his records.

Notorious for mischief, while he’s on the turntables his shows are highly anticipated by those who know that they can expect to see something spectacular.

After Swamp won the title of US DMC Champion, his first year entering the tournament, he shortly thereafter was able to get his demo into the hands of Beck’s publicist and was scooped up as Beck’s DJ. Swamp toured with Beck for years and later broke away into a solo career with his release “Never is Now” in 2001. His follow-up, a drum ‘n’ bass EP, Instruments of Torture, was recorded with Jack Dangers of Meat Beat Manifesto. Vinyl Disciple produced several music videos, including four 3D music videos. The music video for “The Leaders will Follow” is the first music video to incorporate 3D video scratching. Swamp’s music video for “Rock Rollin'” features Dave England of Jackass fame.

DJ Swamp’s scratch at the beginning of The Crystal Method track “Name of the Game” is one of his most recognizable scratches. The song is featured in several films, including Tropic Thunder. As a solo artist DJ Swamp has opened for such artists as Daft Punk, The Prodigy, Bassnectar, Nero, The Crystal Method, Fatboy Slim, The Chemical Brothers, Mix Master Mike, Datsik, Diesel Boy, Outkast, Fuel, Method Man and Redman. DJ Swamp’s scratching can be heard throughout the movie Thirteen which won an Academy Award and was the first movie for director Catherine Hardwicke of Twilight fame. He was featured in the DJ documentary Scratch and the motion picture Clockstoppers.

In 2017, the band Ministry announced him as a new member of the band. Swamp says that he draws off of his environment and a ten year affinity with a nameless muse for inspiration. He observes “what’s going on” and converts his impressions into his art. His musical influences range from hip hop, to metal, punk, industrial and anything in between.