What would you do if you were suddenly granted a superpower? How would you react if you were able to transcend the humdrum and step into a wild and fantastic world? Would you hesitate or dive right in? In the clip for “La Puerta Oculta,” Salvadoran-American rock singer Daglio faces a choice like that: happenstance gives him access to a wondrous and transformative technology. With the very fabric of reality warping before his eyes, Daglio sets off for adventure, and he invites the viewer along for the ride. 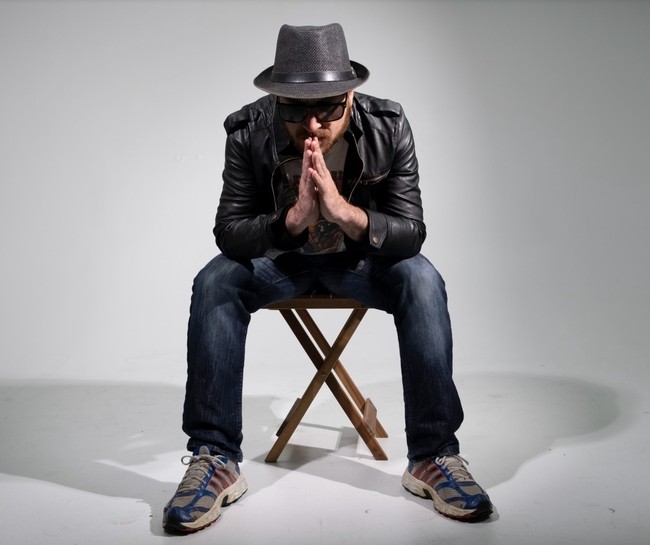 Of course, Daglio already has a superpower. He’s a masterful musician and a formidable hard rock guitarist – one who has built dedicated followings in his native country of El Salvador and his adopted city of Cincinnati, Ohio. His work with the rock groups Ultravioleta and Smoke & Mirrors draws equally from alternative music and the explosive Latin American pop-rock of the ’80s and ’90s; on his own, he’s balanced his influences with consummate grace and skill. “La Puerta Oculta” is sung en Español. In case you need a quick translation, he’s writing about hidden doors – those occluded pathways between ideas, between cultures, and between states of mind that we sometimes find ourselves walking through without even knowing what we’ve done.

To make the journey more palpable for his listeners, Daglio is accompanying his upcoming EP – which will also be called La Puerta Oculta – with a graphic novel that intensifies and extends the science-fiction themes of the songs. The book is a transmission from Daglio the explorer: the pilot of space and time, defying expectations, demanding that the laws of physics bend to his will. Whether he’s making music, telling stories, or designing comics, he’s exhibiting that same fearlessness and expressing that same desire for transcendence.

The clip for “La Puerta Oculta” brings the graphic novel to life. Here, Daglio plays a janitor at a high-tech laboratory, curious about the machines and chemical solutions in his vicinity but with no real knowledge of what any of them do. He’s assisting (and sometimes irritating) the scientist, sweeping up and occasionally letting his desire to investigate lead his broom. When the inventor falls, he becomes the accidental inheritor of the marvels that his employer has been working on. Without understanding what he’s doing, he activates the devices and strides into another world. It’s the same brave step into the dark that every artist has to take, and Daglio makes that move with confidence and curiosity.