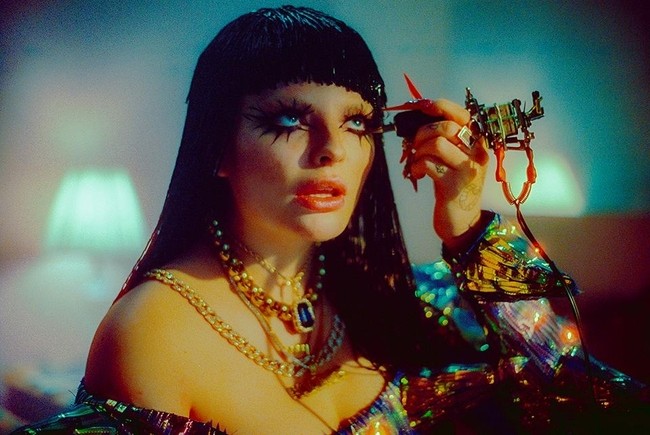 FAANGS release the video for “RELAPSE,” the latest single taken from her forthcoming debut project TEETH OUT (TEETH OUT/Sony Music Germany/RCA Records). The track and accompanying visual takes listeners further into the savage world of FAANGS, whose strikingly futuristic take on pop music embodies and embraces conflict and contradiction.

Shot at the iconic Pink Motel in Los Angeles and directed by NAVS, the “RELAPSE” video finds FAANGS pacing around a chaotic hotel room in extravagant looks, getting ready for a wild night out while a body bag lies motionless on the bed. A strange red light begins to emanate from the closet, restoring FAANGS’ energy and reviving the figure inside the body bag.

Speaking of the track, FAANGS said “’RELAPSE’ is the next addition to the FAANGS world. It shows the psycho side of the music, which is my favorite side! It’s the perfect mixture of swimming eerie pop melodies and an irresistible beat that you can’t help but move your body to. I wanted to create a visual world for the track that drew on this same sense of dramatic absurdity and showed the messiness of a superstar lifestyle as an art form. The result is a true dark paradise.”

“RELAPSE” follows the release of “RICH KID$,” a surprise release from FAANGS as a thank you to her fans. “RICH KID$ has such a special energy,” says FAANGS. “As it is the initial building block to the FAANGS world. It is the very first visual I created after having full confidence in my artistry – before anyone understood what I was doing. I styled it, directed it and wrote the treatment for it by myself. No label, no budget, just the support of some good friends… It has the perfect ratio of darkness, high fashion, energy and bratty attitude. The visual could not be more suiting to the sound. I am so proud of how it turned out.”