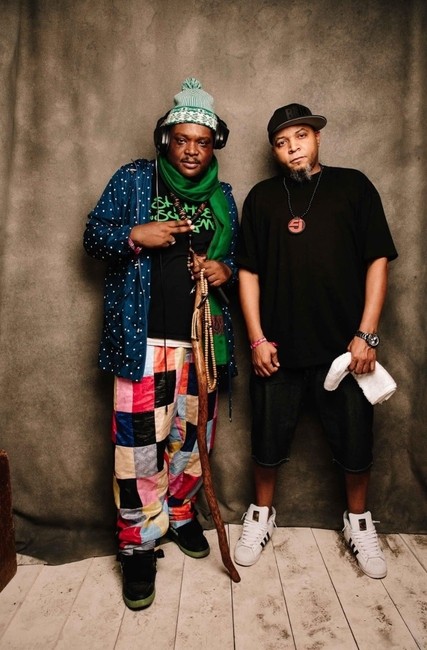 Twenty years of collaboration could cause separation and differences – or everlasting bonds. Dynamic duo Shaheed and Dj Supreme are the latter. They’re one of hip-hop’s most consistent groups by revitalizing traditional boom-bap rap. The Birmingham, Alabama natives have shared the stages with legends like Jurassic 5, Raekwon, Atmoshpere, and Brother Ali. The 2013 LP Knowledge, Rhythm, and Understanding was the debut label release from Communicating Vessels. Shaheed’s lyrical flexibility and Dj Supreme’s rhythmic production received praise as CMJ’s best hip-hop album published that year. A title like that is of no surprise with the way their kinetic songs garner the attention of new and old listeners; the material they release always arrives with a strong message; it’s meant for you to under- and over-stand.

Impose Magazine described Dj Supreme as having “encyclopedic production skills” and said that Shaheed “keeps the vibe and rhyme upbeat with the microphone love affair alive.” They needed someone who would match their passion and dynamism for the new music video “Keep Climbing,” and longtime friend Angela King was the perfect fit. She is a brow expert and makeup artist by day and a suave singer by night. As she joins them in the brand new visual, they flaunt culturally inspired garb, setting the tone for the pride they have in their journey.

The #TellMeChallenge asks users to share personal opinions without direct mention of the subject. For example, tell us you’re a BIPOC (black, indigenous person of color) in America without telling us you’re a BIPOC. The forthright lyrics in “Keep Climbing” can answer that request easily. The track might be the best description of being a minority without being too forward about its title. The music video, featuring Angela King, was shot at The Historic Birmingham Civil Rights Institute. Whether they’re jamming out on the roof or singing in between the exhibits, the glistening sun outside matches their hope, strength, and unity. Although the track is off of their 2013 Knowledge, Rhythm, And Understanding debut album, the message is as pertinent today as ever. The sound is familiar to old school boom-bap, and the rappers tell of their struggle without temper, just acceptance and positive attitudes. Shaheed lays down the hard-hitting verses about struggling with health, wealth, and the law, while Dj Supreme walks us through his fearless self-examination, and Angela King keeps the faith. Together, they will struggle, strive, hustle, and grind until they reach the sky.