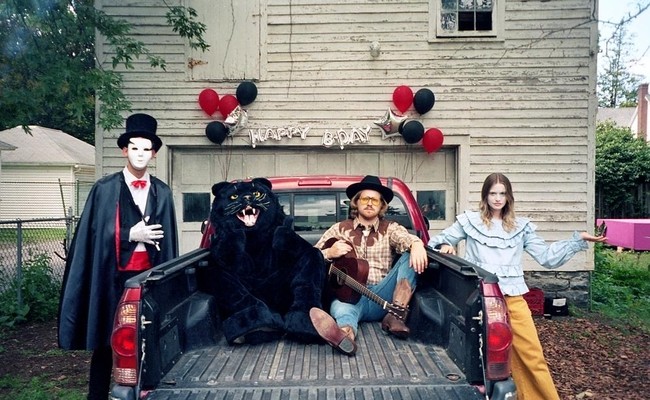 Tigers Jaw today released a video for their new single “Hesitation,” off their forthcoming album I Won’t Care How You Remember Me—recently named among 2021’s ‘Most Anticipated Albums’ by Stereogum and Alternative Press, and due out on March 5th via Hopeless Records. Directed by Shane Moran (who came of age as guitarist/art director of the band Title Fight and more recently has produced visual works for New York-based Supreme), the short film stars band members Ben Walsh, Brianna Collins, Teddy Roberts, and Colin Gorman as a motley cast of performers who drop by a birthday party, where a power struggle erupts. “‘Hesitation’ describes those sinking feelings of sensing that the person you love is beginning to drift away from you,” Walsh says. “It’s subtle at first, but these small details can slowly pull apart the fabric of a relationship. When you hear the hesitation before a response or see it before an action, your brain fills in the blanks and can sense that something is over before it’s actually over.”

Of the video, Moran explains, “The video is a meditation on wonder and, in many ways, exists as an exercise in self-belief. Filmed entirely in a Pennsylvania backyard over the course of a few hot summer days, friends and family (safely) got together to aid in the construction of a previously unknown world—one shaped by the energy of the song itself. This video attempts to showcase the contrast between the physical and the ether, the concrete and the abstract, working as a side-by-side metric to help identify when something simply does not add up.” Walsh adds, “I love how Shane conceptualized such a detail driven video for this song. His style is so iconic and so recognizably his own that he can take a simple concept like performers at a birthday party and build an entire narrative around it that feels so interesting and fresh, with humor and mystery and a touch of the supernatural. I’ve always been a huge fan of his artistic aesthetic so it was such a cool experience working with him on this video.”