2020 has been quite the year – eminently frustrating for certain – but for the Philadelphia group, THE OXFORDS, the rebirth of their legacy has been one for the record books. 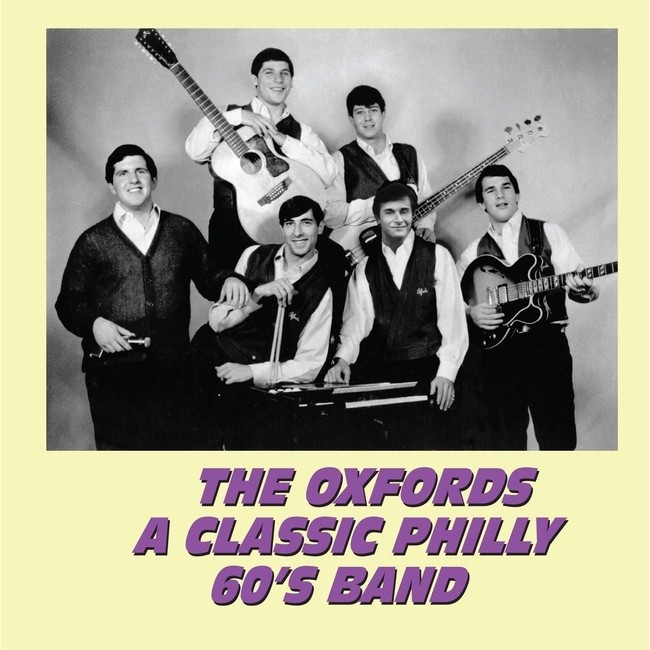 55 years after their initial success they’re winding up the year with the #1 new release on the “Pop Oldies” chart on Amazon. It’s remained in the #1 spot for 4 straight weeks.

THE OXFORDS are: Steve (Bell) Silver, Steve (Fontz) Gelfand, Ivan (Van) Taub, Gary (Crainers) Stanley, Joel (Thumper) Naselow and Byron (Fingers) Blau. These 6 local Philly guys found each other and formed their band in 1964. As Bell recalls, “It seemed like every kid in America saw the Ed Sullivan show that Sunday night in February when 4 guys from Liverpool changed the world. We certainly did and the Oxfords were formed shortly thereafter. We were only 16-ish but our passion for the music was palpable! Although we were a ‘cover’ band, Ivan and Gary started writing original material almost immediately.”

A few months later they recorded some of those songs and quickly achieved a wave of regional success with a string of records: “It Serves You Right” and a cover of Ben E. King’s “Don’t Play That Song” (on the indie-label Grand Records), followed up by their cover of the Beatles’ “You Won’t See Me” (ABC-Paramount), which led to appearances on all the local TV music programs.

“We played ‘live’ at the myriad of clubs, functions, and parties in the tristate area, culminating with the designation of house band at the nationally known Hullabaloo Club (a string of teen clubs across the country associated with the Hullabaloo TV show) We had a full-page article written about us in the National Hullabaloo Magazine and were mentioned in a Newsweek article about the club,” adds Joel.

In the summer as Philly empties out to the Jersey Shore, The Oxfords landed the coveted gig at Tony Marts, in Somers Point N.J.; one of the biggest clubs on the East Coast, at the time – 3 bands – 3 stages, non-stop music! All of the bands lived in apartments on top of the club. The Oxfords were too young to even get a drink in the club but old enough to party in those unsupervised apartments. “It was a wild and crazy time,” adds Fontz, “And, yet, one of the most memorable summers of our lives.”

As time went on and the boys grew up, High School ended and college came into view; the band broke up in 1968. “We all fell out of touch and hadn’t seen or spoken to each other in 50+ years until 3 months ago (Aug. 2020) when Ivan received a phone call from Gear-Fab Records who was interested in releasing a collectible CD of our old music. These songs had never been released together in album form and we were ecstatic. Ivan tracked us all down which resulted in a reunion via a 6-way Zoom chat which we’ve continued on a weekly basis,” says Gary. “It was fortunate that Joel had kept copies of all of the master tapes from the studios allowing the CD to have enough tracks for a complete album.”

Gear-Fab released the 14-song CD on Oct.16 and it shot to the top of the “pop oldies” on Amazon chart within two weeks. It was the highest pre-order sales for Gear-Fab in their history. It has remained at # 1 since then.

The bands’ talented keyboard man (Byron Blau) has a daughter, Jodi, who had fashioned a successful career for herself as a social media specialist and influencer.

Adds Ivan, “She helped us immensely in the release of our CD and under her direction a national social-media campaign was initiated. Unbeknownst to us, Jodi’s Father Byron, had been diagnosed with terminal cancer. He chose not to tell us as he wanted to be treated as ‘one of the guys’ and keep the focus on the happy times about all of us and our music. Jodi finally let us know what was happening and that he probably wouldn’t make it to see the release of the CD. We were crushed by this news as Byron passed a month before the CD was released. We all decided to make Jodi the ‘6th Oxford,’ sharing equally with her in any success we may achieve.”

Jodi was also able to fully interview Byron, to obtain his side of the story.

Fontz recalls that a few weeks later, “Jodi confided that our reunion and pending CD release had lifted her father’s spirits and brought them closer when he told her his story of the band’s journey during those chaotic years (1964-68).

So, what made the Oxfords happen on a national scale? Hard work, determination, talent, creativity, and patience?

The Oxfords finally made it to the top.