Matty Marz says his single, “Mine!,” took a full three years to create. That sounds more like Steely Dan, which also took that long – but to create full albums! He describes the song’s lyrics to be about “a blossoming relationship.” Let’s hope that relationship didn’t take three entire years to blossom, as well. 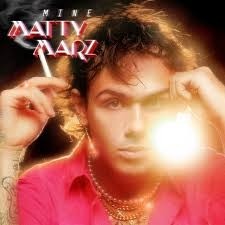 The track begins with a dance-y synth melody and rhythm. Marz’s vocal begins by telling his love story chronologically, even mentioning what happened on a Sunday at five o’clock. Marz sings these words over a glossy, pop-rock arrangement. He has said artists like Madonna, David Bowie and Prince have all influenced him, and the listener immediately picks up on these inspirations. There is an Eighties, MTV pop music feel to this track.

Marz took a serious interest in creating music at a young age, studying classical music and singing back when he was only 13. Eventually, he found his main love, which is pop music.

“This feeling is something I cannot hide,” Marz admits during the song’s chorus. It’s true, too, because when we’re falling in love, it’s noticeable. People can see it in how we look and behave. I’m not sure if this is a feeling we actually attempt to hide, though. Most of us – I think – want to show off the fact that we’ve found love. We wear it as a badge of honor.

There’s also a point of pride expressed with this song’s title, “Mine!” By showing possession – in the best, most reasonable sense of the term – Marz is reveling in a love he can call his own. This is not expressing unrequited feelings for another. This isn’t a romantic daydream. Now, his is a symbiotic relationship, where he lovers this person, and this person loves him. Also, the exclamation point on the title is significant. This reveals enthusiasm and excitement over the relationship. It leaves no doubt that Marz is completely convinced this is the real thing.

Stylistically, “Mine!” thumps to a 4/4 disco beat. Disco may be a musical genre from the past, but its beat still lives on. It’s in a lot of modern music. Heck, even BTS’s hit, “Dynamite,” has a disco groove. In retrospect, disco music was wrongly derided. Those that loved rock & roll felt threatened by it, although they shouldn’t have felt this way. It was simply dance music, and since the beginning of rock & roll, people have loved to dance. Sure, metal heads can sometimes only bang their heads, which isn’t really dancing, but they shouldn’t hold their lack of dexterity against the rest of us that enjoy moving our whole bodies to the music.

Marz has put his romantic celebration to this dance beat because he wants to celebrate by singing and dancing. That’s only natural. Then end result of Marz’s three long years of song creation is a fun, happy dance song. It’s tough to not want to move while this song plays, which is probably the ultimate compliment for a dance music track. So, to all you new romantic couples, this song is yours!