Como Asesinar a Felipes is a Chilian band, which is also known by the acronym CAF, and its new single is titled “Hemos Vuelto del Abismo,” which translated means, ‘We have returned from the abyss.’ It’s taken from the group’s album, MMXX, released on October 16. It is also a strangely moody song, too, which may make you feel like you just got back from the abyss after listening to it. 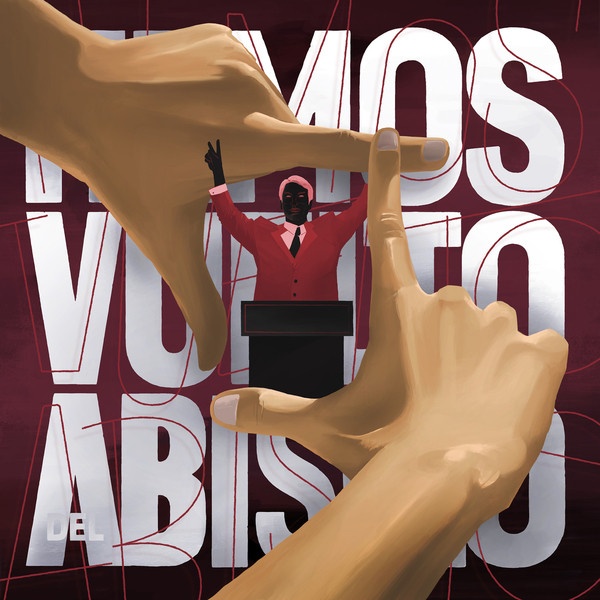 Although CAF may be a new name to many Americans, the group formed in Santiago back in 2006. In fact, the act has already released eight albums to date, which have been described as unconventional sounds. CAF is a five-piece that touches upon jazz, rock, classical and hip-hop elements in its songs. Some have even referred to CAF as post-Pinochet Chile music. Pinochet, you may recall, was a Chilian leader that led with an iron fist. In the group’s home country, it won Pulsar Awards for Best Urban Act and Album of the Year for its 2019 Naturaleza Muerta release.

“Hemos Vuelto del Abismo” begins with ominous, pulsing synthesizer sounds, before hip-hop inspired percussion steps into the mix. The song’s initial vocal sounds far away, like a cry from the far-off wilderness. Next comes a weedy keyboard riff, which sounds like early West Coast gangsta rap. This is combined with, appropriately, a rapped part.

The song’s artwork pictures a man in a red suit standing behind a podium. He’s either a preacher preaching, or a politician giving a speech. This dark-skinned figure is boxed in by two hands creating a box around him. Could this be suggesting that conventional politics thinks consistently inside the box? Is the act suggesting that, to solve many of the world’s biggest problems, those in charge need to think outside the box? This isn’t explicitly stated, but this artwork at least suggests as much.

Musically, the instrumentation goes from that weedy, gangsta rap sound, to something a little weirder. There’s just something off-kilter about the melody that accompanies the rapped part. The rapped part of the song is rapped with great authority. Not as strong as, say, Chuck D of Public Enemy, but along those lines. Even not being able to speak the language, the listener can tell something truly serious is being rapped about. This isn’t some guy going on about his sexual prowess. When a song is about coming back from an abyss, you get the impression this is speaking about social unrest. Chile has had more than its share of social unrest, too. “Coming back,” however, also suggests hope. The song, after all, is not talking about being in the abyss. Instead, you might well call it a post-abyss song, which gives it some positivity.

Maybe you don’t know much about Chilian music. I sure don’t. However, based upon this powerful single, it’s clear that American acts, such as Public Enemy and Rage Against The Machine, have impacted artists around the world. Social activism has no language or racial barriers. Only, in this case, CAF is speaking to the issues of its home country.