It’s been 6 months since the release of Finnish duo The Impersonators’ last single and video for “Cloud Nine.” Since then, lead singer Tom Tikka has found himself leading The Missing Hubcaps to an international iTunes chart-topping single and several award-nominated music videos. Now, The Impersonators are back with a brand new single and video, “Rodeo.” As you’ll soon find out, it’s definitely not their first… 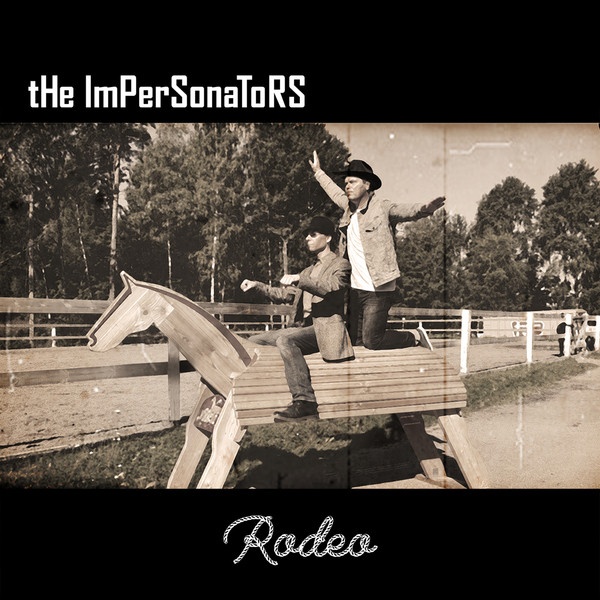 Frontman Tikka tells the story: “Rodeo’ was written over a year ago and it was recorded last October. In fact, this was the last track Antti and I wrote together before The Impersonators went on what turned out be nearly a year-long hiatus. Although ‘Cloud Nine’ came out last March and I was promoting it full steam, in reality, I was already busy with The Missing Hubcaps, intending to drop a few songs while Antti and Janne were also absorbed in their own projects. Only mentioning that because I’m finding it hard to remember anything about recording the track. Luckily, I do remember what inspired the song.’

“Listening to Spotify one day, I heard the word ‘rodeo’ used in another song by the same name in exactly the opposite sense. The phrase in the tune was, ‘You ain’t my first rodeo.’ I liked the song and the lyrics a lot but yet, found my mind drifting off to thinking how terrible it feels to go through one’s very first relationship rodeo. We’ve all been there. It’s

hell and something we’ll remember for the rest of our lives.’

“It was in this state of mind that I wrote most of the melody and the words to the chorus. Antti provided the remainder of the lyrics and voila, another Impersonators song was born. Well, not quite…I still had to finish the tune off with my wife Elina Suominen, who wrote the melody to the middle eight and that haunting guitar riff that begins the song. And then as always, I sent the multitrack over to Janne Saksa, who did an outstanding job with the production…just listen to the strings alone and you’ll know what I mean.’

“The music video was scripted, directed, filmed and edited by my wife Elina and shooting it was great fun. There are a lot of humorous parts in it that I truly love but my favorite one is where Antti gives me a few flicks with a riding crop. You’ll need to see it to believe it!”

ABOUT THE IMPERSONATORS: Comprising Tom Tikka and lyricist Antti Autio, The Impersonators are just that: a duo which masquerades as a full band and does everything it can to defy convention – whether that being their insistence on avoiding touring or their songs, which home in on the warts-and-all gnarliness of love and real life. In fact, if one were to find a common theme that runs through the group’s entire catalog, it would probably be how life very seldom resembles or turns out like Disney fantasies.

Despite their poignant lyrics, The Impersonators are still a joyous and sweet proposition, with their vocal harmonies and chiming chords harking back to such 60s pop majesties as The Beatles, The Byrds and The Beach Boys. Together with their secret weapon, producer Janne Saksa, The Impersonators craft their lyrics and melodies into retro-flavoured “alternative pop/rock”. While adding a modern twist to the final soundscape, their goal is to nurture and cultivate the creativity, spirit, and warmth that graced the pop records of yesteryears.