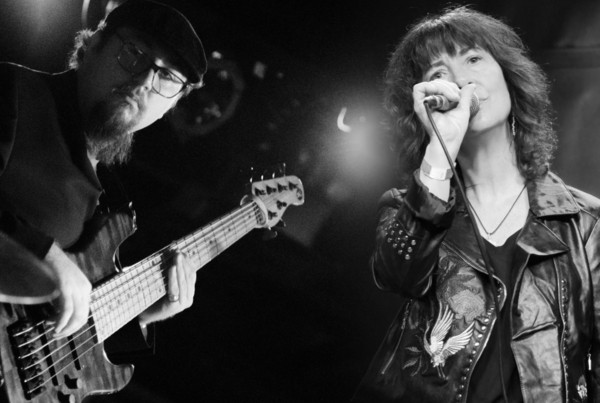 “We could be so much better than this,” sings Dyanne Potter Voegtlin on the soothing but provocative chorus to “We Could Be,” the single from Casually Containing Rage, the upcoming EP from Potter’s Daughter. Even if she hadn’t accompanied the song with a video that makes her engagement with current events manifest, you’d still know exactly what she means. If you’re an American, you’re painfully aware that your country hasn’t lived up to the lofty ideals of equality and fair treatment inscribed in the Declaration Of Independence and the Constitution. It’s been a troubled time in the United States, and Voegtlin and her bandmates are raising their voices on behalf of resistance, egalitarianism, and hope.

Potter’s Daughter calls their label Melodic Revolution, and that’s not just an aesthetic aspiration for the jazz, soul, and progressive rock group. Voegtlin demands ethical behavior from the authorities, and she’s thrown the weight of her considerable talent behind such causes as Black Lives Matter, immigration reform, and other social justice movements. On “We Could Be,” the group backs up her sentiments with music that is at once magisterial and soothing, hopeful and yearning, deeply beautiful and pacifistic but not without a steely core. Voegtlin’s vocal performance does indeed contain a prayer for a better day – but it also carries words of conviction from a woman who refuses to back down from the formidable challenge of living in modern America.

But Potter’s Daughter knows all about challenges. The Virginia-based group has been making gently uncompromising music for years, impressing fans of jazz-pop, adventurous folk, and conceptually sophisticated prog in equal measure. They’ve played ProgStock, toured with Joe Deninzon and Dark Beauty, and collaborated with the like-minded Annie Haslam of progressive folk titans Renaissance. The band has even gotten the nod of approval for its compositional creativity from one of the undisputed masters of progressive music: Jon Anderson of Yes.

A song as relevant as “We Could Be” demands a video that speaks to present American realities; director Serena Elisabeth Kunzler has delivered with a clip that amplifies both the song’s warmth and its underlying hopeful message. There’s plenty of footage of the painting of a pair of Black Lives Matter murals, celebratory dancing in the streets at protests, and homemade signs that broadcast ordinary people’s aspirations and desires. Yet the filmmaker also flashes a procession of names that have become inadvertently famous – Philando Castile, Breonna Taylor, George Floyd, and many others who have been executed without trial by the police. Never for a moment do Voegtlin, Kunzler, and Potter’s Daughter forget what they’re struggling for: justice, and peace, and an America that delivers on its infinite promise.