One of the bewitching hard rock anomalies to come out of Georgia is “Ashes to Omens,” headed by mastermind James Branton. Their vision is inspiring and their music is a tantalizing mix of edgy lyrics and hard driving instrumentals. Certainly a faction destined to become a household name, “Ashes to Omens” might very well be 2020’s biggest surprise. Their highly anticipated new single, “War Cry” is set for release October 2nd, and in celebration lead singer James Branton and I exchanged some questions and answers – 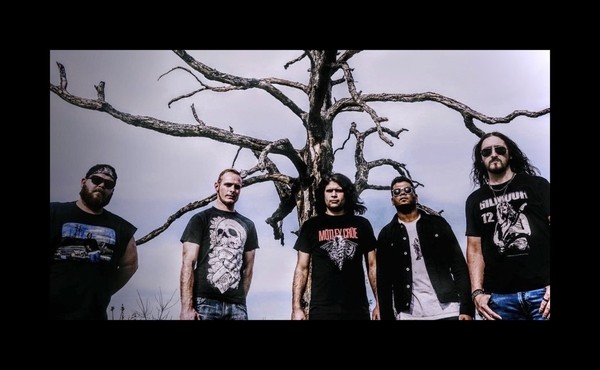 What inspired the birth of “Ashes to Omens” and how did you get the name?

We actually thought for a long time about the name for the band. We wanted something that represented who we are individually and where we came from. Our thoughts were, “We’ve all been in previous bands” and this is something newer so the name itself represents the ashes of previous bands coming together to create a new vision that honors the past.

What inspired the theme of your newest song?

I think a lot of our music that we have released in the past comes from a place of personal experience. This song specifically comes from a darker place. Two of our members struggle with depression, anxiety and PTSD. War Cry is a song that was built around those feelings to lift one another up and support one another in times of mental distress. We think that the song finds a way to let people know that they’re not alone and if they’re struggling with that sort of thing, reaching out for help is what they should do. Ultimately, that there will be someone there for them.

Please introduce your band to the planet and what influences your music?

We are a 5 piece hard rock band from Athens, GA! Home of the Bulldogs, R.E.M.  and the B52’s. We became a band in 2017 and are influenced by tons of mainstream rock bands like Breaking Benjamin, Shinedown, Nothing More, and Tool. We’ve went on several tours in the U.S and opened for numerous national acts like Tom Keifer of Cinderella, REHAB, Hallow Point, Demon in Me and Lullwater. Our music is influenced by everyday life, overcoming adversity, building relationships and standing up for what we believe in.

Do you recall a moment in time that changed the trajectory of your life?

For me at least, I can’t really speak for the rest of the band, but not long after I founded the band I was diagnosed with Thyroid cancer. It was a pretty scary time for me and really made me think about life and mortality and the time we have here. I decided then that was going to give everything I had to the music I was creating and everything I had to my family regardless of the outcome. That moment changed me. It made me stronger in my beliefs and who I am as an individual and the relationships I have, they’ve gotten stronger as a result.

What is your ultimate stage fantasy?

I used to say it would be to have fans sing our music back to us, but that’s already happened and it’s the greatest feeling in the world. So, it would probably be to be able to go on tour with some our influences. We’d love to tour with Breaking Benjamin or Nothing More or some bands that we’re huge fans of like Ice Nine Kills, Buck Cherry and tons more.

Where do you see yourself in five years?

110% touring the country and fingers crossed, getting a Grammy!

If you could send a message to the planet what would that be?

Music heals. It really does. It gives you a way to connect to other people during your happiest times and times where you’re ready to quit. Take care of one another and love one another and be there for each other.

If you could have me ask you any question on the planet what would it be and how would you answer?

Would you like to play a show with the Foo Fighters? Why yes, yes we would.

What’s next for Ashes to Omens ?

Finishing this album is a huge priority for us. It’s tough right now because everything is shut down. Getting in venues and studios is not really a thing so being able to get our music where it needs to be so we can get the album done is priority number one. We want to be able to get our fans the music that they love.