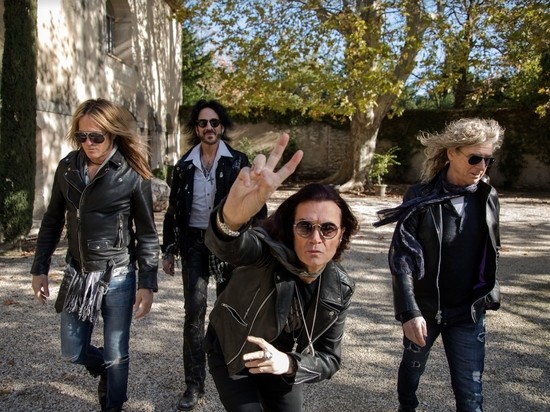 Few genres traffic in brutal honesty more unflinchingly than late ’70s / early ’80s hard rock. For every fist-pumping party song, every celebration of self-destruction, there’s a hard-strummed tale of hard luck detours and questionable decisions. Take anything the guys in The Dead Daisies say as gospel: these are some of the kings of the kind of rock n roll that made its players earn their stripes. They’ve got the chops and the scars to prove it. The band is a who’ s-who of heavy: Doug Aldrich of Whitesnake and Dio, drummer Deen Castronovo of Journey and Bad English, bassist and singer Glenn Hughes of Deep Purple, and rhythm guitarist David Lowy of Red Phoenix. A collective that never seems to rest, they’ve toured with Kiss, brought stadiums to their feet, and released five records. “30 Days In The Hole” is the kind of bluesy, acoustic slow burn that only real-deal rock vets can pull off.

Their acoustic re-imagining of the Humble Pie classic cuts to the core. More than paying tribute, they’ve given the song a second life. Aldrich’s clean guitar, even without distortion, thunders with emotion and foreboding. The mood and melody he wrings from the frets reveal turbulence lurking beneath the stripped-down serenity. Hughes walks a fine line; his vocals a display of strength and vulnerability, but most of all, restraint. These are lyrics that paint a bleak picture, and they beg to be belted. But he knows that the subject matter demands an even keel – the mark of a master. Hughes’ and Aldrich’s contributions are as perfectly matched as codependent drinking buddies who dread last call more than they dread the grave. This is rock n roll at its purest, the bare essentials, making beautiful music out of ugly truths. The track is a killer reminder that the guy sitting silently all the way across the room from the bar is the one who has the best stories. Just not the best endings.

The band didn’t just shoot the video separately, and they didn’t just shoot it themselves; they shot it on their phones. The loneliness and isolation that fuel the sonics and subject of the track also make it perfect for a distanced performance video. The stylized, grainy footage of Hughes and Aldrich is low-lit and close-up, but their performances and somber demeanors really make it feel like they’re miles from any other living thing, save for a single raven. He silently haunts the clip, saying all he needs to with his presence alone. More than death, the raven in many cultures signifies the aftermath of a bloody and pivotal battle and the passing of its hero. Fitting, as “30 Days In The Hole” is the tale of an all-or-nothing, one-person war. The Dead Daisies may have let the tubes cool in the half-stacks for this one, but it might be their most monumental effort yet.