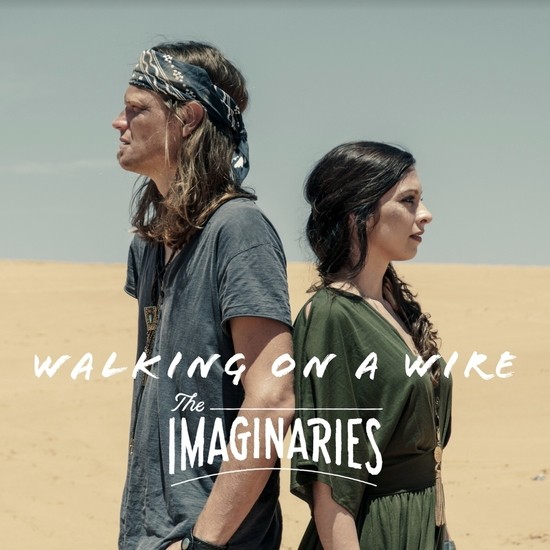 Songs are never done, and music never sits still. Recordings capture and hold a moment, but the combination of the tempo, sounds, and structure of any song continually move upon shifting sands. The life of the music maker, too, is in a constant state of flux. Not every opportunity evolves into some harmonious triumph. Not every circumstance is a perfect melody. But Maggie McClure and Shane Henry continually find a way to take the unpredictability of the life they’ve chosen – or more accurately, the life that chose them – and transform it into deeply moving, timeless Americana. To the casual observer and their ever-more numerous fans, The Imaginaries are the picture of success. They’ve converted concertgoers while between the two of them opening for acts like Etta James, B.B. King, Buddy Guy, Sara Bareilles, and many more. Take any major network, and chances are the husband-and-wife duo have had their music recently featured. But they wrote “Walking On A Wire” in response to the constant push-pull that fills the lives of those who’ve taken the path far less traveled.

So what do you do when life’s got you feeling lost? You can throw in the towel or pick up the pen. McClure started writing the tune during a very trying time for the band, and the two then spent many a night fleshing it out, until it barely resembled the initial spark. Out of simple yet lush instrumentation, this “song about true resilience and keeping the faith and staying the course, no matter what” was born. Plaintive, call-and-response verses give way to urgent, sweeping choruses as big and beautiful as the Oklahoma sky. To do their soaring harmonies justice, they recruited players who’ve performed with legends like Aretha Franklin, Paul Simon, Neil Young, and Little Richard as well as current artists such as Jason Isbell, Drive By Truckers, Sufjan Stevens, and Jon Foreman. The result is an intensely personal cut of folk-rock that is rapturous, both for its magnificent melancholy, and immediate emotional resonance. McClure concludes the track with: “Am I supposed to run… run until my legs won’t run anymore?” Great music asks big questions.

The pair shot the video over the course of two very long days in Oklahoma’s Little Sahara and Gloss Mountain State Parks. The video’s two dramatic backdrops feel light-years apart, yet they’re just a short way away from each other on a map. Henry and McClure each wander the windswept wastes of Little Sahara’s sands, lost. Their characters jump into and back out of an alternate universe of breathtaking green expanses, a tease that only adds to their confusion and torment. Director Reagan Elkins, who shot their “Revival” and “Thinking ‘Bout You” videos, captures the longing, the isolation, the fleeting joy and resignation the two cycle through as they search for one another. As the clip comes to an end, we realize that sometimes it only feels like we’re running in circles.