Opening with a mournful acoustic piano part, Paul Karcz’s single “Home” builds into an emotional power ballad. The song’s artwork is just as dramatic. It features ghost-like figures heading to an old house right around evening time. Home is usually such a comforting concept. However, this song leaves anything but a comforting feeling within the listener, after all’s said and done. 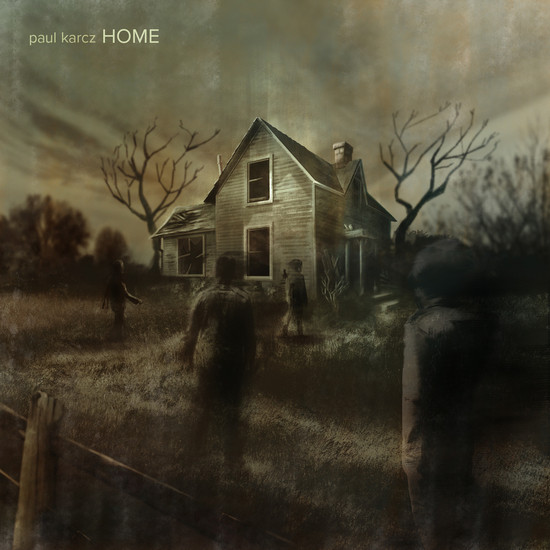 Karcz sounds to be reaching out for empathy when he begins singing the song. “I want someone to feel this/As real as it is to me,” he starts. He then states, “I hope that you will follow/And embrace the beauty you see.” Then it gets spiritual. “You said your demons would not conquer you again somehow.” It is right after these words, though, that Karcz announces, “I dream I take you home.” This is where the song’s title comes into play.

So, what is meant by home in these lyrics? Home is, as they say, where the heart is. Home also represents where we’re from. Then again, home is often used to symbolize death. When loved ones are said to go to heaven, they’re often described as going home. However, none of these descriptions seem to fit Karcz’s song lyric. It’s not immediately clear, but the home he’s speaking of appears to be that of a different kind.

Although the melody and rhythm to this song is oftentimes dramatic and sad, Karcz’s next words contrast with the music by coming off distinctly positive. He sings about seeing beauty in this other person. One must wonder just what demons are being sung about, as well, though. In many cases, demons are synonymous with chemical abuse. Drugs are oftentimes called demons, which haunt a person until they overcome these evils. The subject of this song has already overcome whatever demons were haunting him/her (at least) once before, and this person swore he/she would not be conquered by these same demons again. This song could very well be describing the fight against drug addiction. However, because drugs are not mentioned even once by name, we can only infer this interpretation from the lyrics.

One of the interesting elements of this song, is how it keeps to a steady, methodical pace. It doesn’t speed up or slow down, but sets itself into a slow, but persistent, groove, and stays there.

The singer, although hopeful, doesn’t sound convinced that this person is fully out of the woods yet. “I wish that you were home,” he sings at one point. When somebody wishes something, this is a clear indication of uncertainty. Or else he would have stated emphatically, ‘You will be home.’ He doesn’t state that, though. Instead, he’s heard wishing for it.

Toward the song’s end, Karcz sings, “With every breath it will lead you somewhere,” which is quite vague. What is the “it” he is talking about? Is this “it” the breath? If so, how does one’s breath lead a person anywhere? This is a little confusing. It’s not about, say, god, who is most often described as a ‘he,’ not an ‘it.’ This leader’s identity is tough to make out.

The song ends with Karcz stating again, “I dream I take you home.” It ends by asking more questions than it actually answers. It’s a fascinating, if slightly mysterious, piece of music.