Sam Sankoh aka AFRICANPOSTMAN for delivering the Good Word to the nation Sam Sankoh was born in London where hes mom taught him to sing watching Top of the Pops and raised in Sierra Leone where he sang in choirs and took part in all school plays, moved to New york in the 80’s promoting hip hop and performing from 1989 through 1994, NYC-based WILDLIFE. 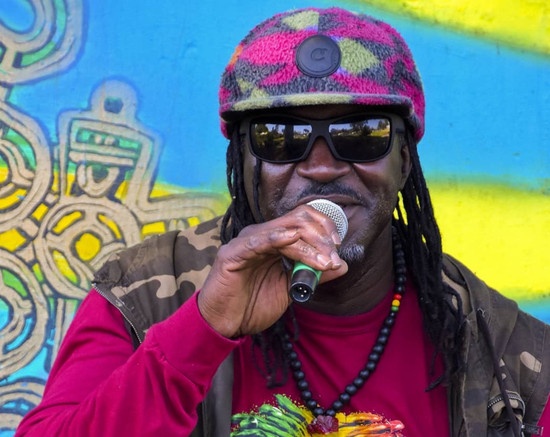 SANKOH could be seen performing regularly throughout Manhattan and the surrounding area. Founding members, Robert Mitchell (guitar & vocals), Yuergen Renner (drums) and Steve Foreman (bass) were later joined by singer & percussionist, Sam Sankoh. With its members representing three continents (Europe, Africa and North America), Wildlife concocted a unique blend of Rock, Funk, Jazz and World Beat to generate its eclectic sound. During the five years of its original incarnation, Wildlife performed regularly in NYC, toured five States and released three CDs which could be heard on College Radio throughout the Northeast.

Sankoh joined the US Navy and relocated to San Diego. After Navy life, he became lead singer and frontman for Tribe of Judah Reggae Band .

A one time Worldbeat CTR favorite, opening for acts such as Mutabaruka, Half Pint, Capleton, Sister Nancy, and decade of live perfrmances in San Diego with Tribe of Judah and Love and Groove, Sankoh and Rockaway Kings, Sankoh releases and distributes the album Tragic Flower on Sankoh Records.

In the summer of 2019 sankoh released the 50/50 Love EP, distributed worldwide by Tuffgong Records