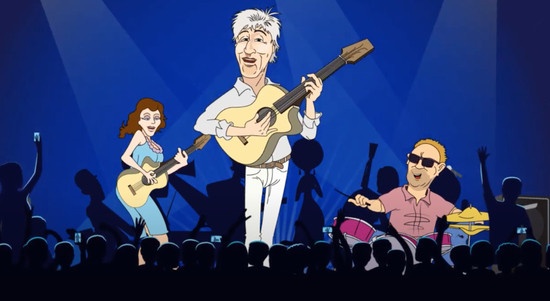 In Dex Cox’s official music video release for “My Internet Lover”, it was decided to use an animated version of a caricature of Des Cox, shot in the same way as one of his live performances, and all audience effects have been taken from live on stage recordings.

Des’s stage show lasts for approximately 90 minutes and is totally adlibbed and consists of stand-up comedy, impersonations, stories and songs of every type. This particular song was, as part of his act, also adlibbed initially, so the lead vocal and guitar on the audio track are still as originally adlibbed, with some other backing pieces added later.

Des Cox has worked in screen animation for many years as a creator, writer, producer and director, and has been responsible for developing and introducing new ways to animate. One of the benefactors of Des’s work was Jim Henson, the creator/producer of the Muppets and Sesame Street, who asked Des for permission to use some of the new methods he had developed to animate those productions.