If you had the opportunity, would you procure a robot boyfriend or girlfriend from an online catalog? No? Are you sure about that? Hasn’t the lockdown changed your calculus? Suppose you could tailor your purchase to your specifications – height, build, abilities, and general disposition. Something like that might be difficult to turn down, especially given current conditions. 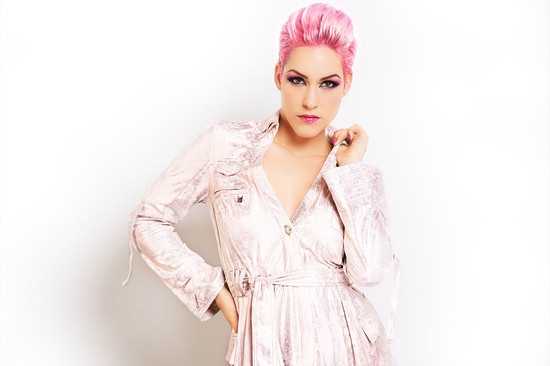 Electronic pop singer Tina Tara has an instinctive understanding of our subconscious fantasies, and in the clever clip for “Maybe,” she’s cheekily providing a “solution” that we may not have yet considered. The boyfriends she has shipped to her apartment are made to order: they look and act the part, satisfy her every physical need, and make it so that she never needs to leave the house. Is this clip satirical? Well… maybe.

Provocation comes easily to the pop artist, who splits her time between London and Los Angeles, and whose personal style is a blend of sleek California glamour and spiky UK attitude. “Maybe” is the follow-up to two remarkable 2019 singles: the glittering, Latin-pop fusion “Arriba” and the strutting, effortlessly sexy “Worth It.” Both of those tracks were co-written by multi-instrumentalist Anthony Goldsbrough, whose credits include Bastille, Ed Sheeran, Hozier, and Olly Murs, and who is back in the producer’s chair for “Maybe.”

Once again, Goldsbrough and Tina Tara have crafted a sweet and delicious confection – a song designed to put the dance floor in motion, and a showcase for the star’s vocal talent and playful personality. “Maybe” is a teasing come-on set to a stop-start beat and a relentless rhythmic throb, and it’s already proving irresistible to fans of electropop. Dope Cause We Said, which streamed the song upon its Valentine’s Day release, wrote that “it has enough bounce to make car clubs jealous.”

She’s also a delightful screen presence, and a natural music video star. Her 2019 clips were funny, self-aware, and utterly engaging: in the “Worth It” video, she splits time as a comic-book heroine and a big-wigged, hard-drinking male version of herself. In “Maybe,” she’s all girl. Her robot boyfriend cooks, cleans, acts as a personal trainer, and needs no assistance in the bedroom. When he’s worn out, or when he malfunctions, it’s no problem at all – Tina Tara is back on the Internet in search of an upgraded model. She’ll leave it up to you to decide if this a trenchant dig at consumer culture, or an anticipation of demand to come, or both at once.