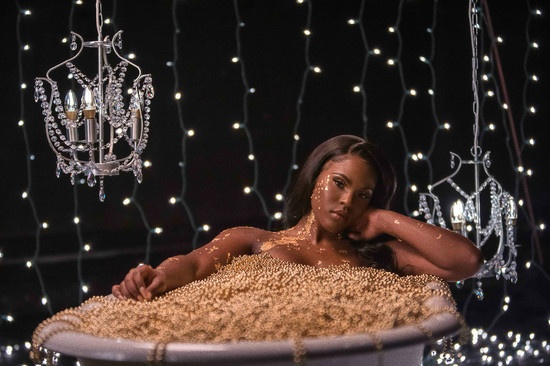 These days, release after release, Slip-N-Slide Records can do no wrong. They’ve been ear to the streets, consistently snatching up Miami’s hottest artists, and signing R&B natural Teenear and her silken vocal cords may have been their smartest move yet. The born-and-raised Miamian has got the songs, the presence, the beauty, and the drive to blaze trails like Mariah Carey, Brandy, Aaliyah, and Beyoncé. And it’s clear from “Dolla Signs” that, like her idols, she’s also got a handle on what’s important: perspective – the kind that keeps stars in the game long after most have burned out. She’s only just begun, but she’s already releasing killer singles, working with producers like Jim Jonsin, Marley Waters, Stereotype, and Lamb. The world is hers. But when you check the lyrics to “Dolla Signs,” it’s obvious that to Teenear, that world revolves around her one true love.

With the fall 2019 release of “Dolla Signs,” Teenear continues to do it the only way she knows how: her way. After her girl-power anthem “Friday Night,” featuring Sage The Gemini, landed her on the pages of Billboard, she came right back with “I Like That” featuring Lil’ Baby, and 2018’s “Need Your Love.” She needed a seriously hot follow-up to a streak of hits like that, and she found it: a perfect mix of her talent and allure, a super sexy slow jam about how to be the woman who has it all. She conveys real vulnerability while keeping her assertive swag intact, a balance that mirrors the topic at hand: make those money moves, sure, but be sure to make time for the one who matters most. Produced by Ayo and Keyz, “Dolla Signs” is mesmerizing: catchy, sultry urban pop with the kind of instantly classic melodies that are sorely missing from much of today’s R&B.

Teenear lounges in the absolute pinnacle of luxury and decadence. Picture it: a clawfoot bathtub overflowing with pearls that barely cover her, surrounded by a sea of flickering candles. Complete with gold flake makeup accentuating her striking features, Teenear is impossible to look away from. She tells her man that all of this, this opulence she’s draped in, the trappings of fame and success, are nothing if he’s not on the other end of the phone. Director Damian Fyffe, who’s shot videos for J Lo, Drake, Nicki Minaj, and Cardi B., then switches from the glam to the grind, capturing Teenear killing it in the studio and prepping for the shoot. The visuals are stunning, but for all their sparkle, they’re there to help Teenear remind us that the love of another is the most beautiful thing there is.