It was that time of year again in Anaheim for the National Association of Music Merchants (NAMM) show with 2,000 exhibiters representing 7,000 brands, and attendance of 115,888 Members and invitees.  As usual there were tons of each type of instrument and every variation imaginable.  There were also a lot of signings and performances by artists like Don Felder, Slash, Billy Gibbons, Zakk Wylde, Earth, Wind, & Fire, Tower of Power, Kenny Loggins, Matt Sorum, Alan Parsons, Steve Lukather, Skunk Baxter, Kenny Olson, Robby Kreiger, Gary Shelton (that played all of the parts from Frankenstein on guitar), Jerry Cantrell, and many more.  Highlight performances in addition to the award shows (below) were the Yamaha Main Stage events, The Ultimate NAMM Night and Gibson Live at the Grove.  NAMM U also provided educational seminars that keep you up to speed with the rapidly advancing technology.  If you do virtually anything in the music biz, this is the place you need to be. 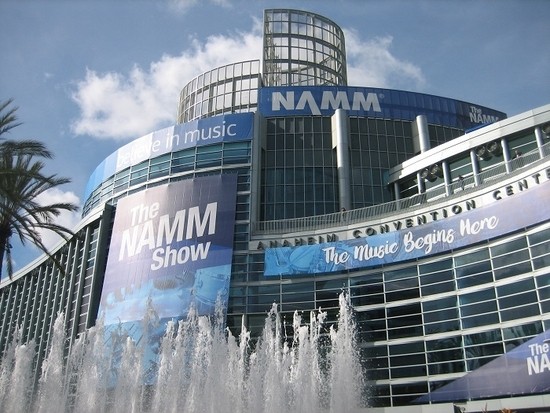 Kramer – Gibson has activated the previously dormant brand with Kramer’s Original Collection including the Icon, Baretta, Pacer, Focus, and SM-1.  The  Modern Collection will feature the Assault, Striker, Nite-V, bass and more.

Friedman – They offer their custom made high end spin on vintage guitars and amps.  The guitars are a combined vision of Dave Friedman and builder Grover Jackson.

Sawtooth – Their Americana Relic Series offers their affordable spin on the re-creation of the classic axes and basses.

Vintage – They offer their version of an affordable re-creation of virtually every iconic Gibson and Fender guitar and bass.

Bryan Guitars – They have three versions of yes, liquid filled strat-style guitars with interchangeable colors.  These are actually not that heavy, and can be custom ordered.

Fender – New series included are the American Ultra, the Acoustasonic Strat, Parallel Universe, Lead II and III.  These are all available in numerous configurations and color options.

James Trussart – Always eye-catching metal adorned axes in various shapes and configurations.   Sort of Zematis style on steroids.  Also unique, working amps made out of five gallon “Jerry” gas cans.  They don’t show them for sale as of yet!

PRS – Their amps were in full attendance, including the signature John Mayer, Mark Tremonti, David Grissom models and Archon models.  The versatility of the amps were highlighted by Paul doing a neat demo showing the multitude of tones pulled from basically any PRS guitar and any PRS amp.

Sundragon – This amp is a re-creation with Jimmy Page of his original Supro Coronado that was almost destroyed, then rebuilt with a new tonal quality used in Led Zeppelin and beyond.

Fender – The offerings added to the line are a new Mustang amp, and the new 64 Custom Princeton Reverb amp.

Dolby – Dolby On is an app that turns your phone into a virtual recording tool with eight built in features.

Dynaudio – They offer professional audio studio and reference monitor speaker systems, and even have a series for using in the home and car.

EVENTS – AND THE AWARD GOES TO

For more show info, pics and videos please check out: