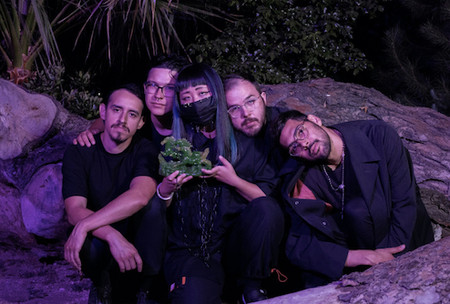 Draag just announced their Clara Luz EP, co-produced by Jon Nuñez of Torche, to be released on February 21. This follows 2018’s Nontoxic Process EP praised by the likes of Noisey for its “murky grunge-gaze compositions and gut-twisting songwriting. With flavors of Sonic Youth, Boards of Canada and My Bloody Valentine mixed together, Draag began as a solo project of Adrian Acosta, trained as a mariachi singer by his established norteño musician father. He recruited other members – Jessica Huang, Nick Kelley, Ray Montes and Shane Graham – from disparate upbringings in the worlds of underground punk, no wave, experimental jazz, and classical music training. The project has been tested by illness and personal turmoils – this new EP is about processing trauma, how it can be terrifying & isolating but also incredibly empowering. Having played shows with Reggie Watts, Part Time, Vinyl Williams, Goon, Young Jesus, Girl Friday and more. Draag also has an upcoming residency at The Echo in February.